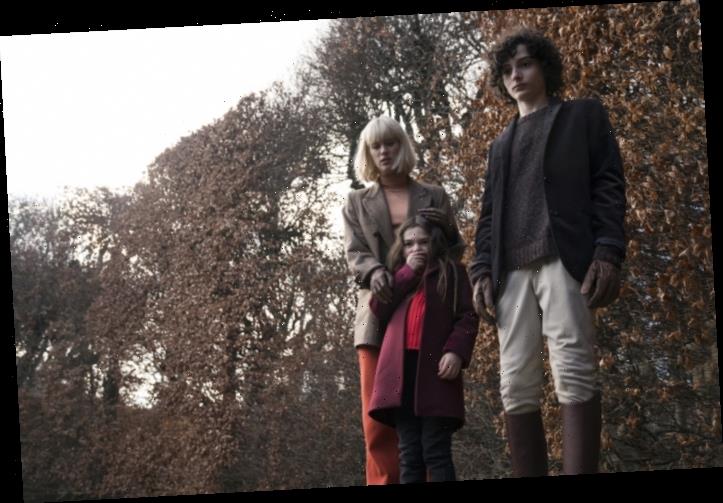 Director Floria Sigismondi’s “The Turning” is like the alt-rock cousin of author Henry James’ novella “The Turn of the Screw.” From its grunge-infused soundtrack and period setting to its fiery feminist overtones, this is an ambitious contemporary take on the iconic, claustrophobic thriller. Concerning two young orphans who psychologically torment their caretaker in a spooky, sprawling mansion, it comes across as a fuzzy, frayed adaptation courtesy of a gimmicky, ambiguous climax that undermines the journey. Lacking spine-tingling dread, taut tension, and the deservingly provocative ending needed to make its modern sentiments land, this re-imagining is less than a classic.

Bubbly teacher Kate (Mackenzie Davis) has taken a position at Bly Manor as governess for 7-year-old Flora (Brooklynn Prince), who’s suffering from trauma associated with the death of her parents outside the gates of the palatial estate. The family’s former live-in nanny, Miss Jessel (Denna Thomsen), abruptly left under mysteriously motivated circumstances and duress. With its towering Gothic architecture, crawling with twisted vines, tucked away on the property like the dark secrets locked within its cold concrete walls, the mansion is a foreboding relic frozen in time. Also inhabiting the home is Mrs. Grose (Barbara Marten), a pale, ghostly presence in gray who doesn’t make Kate’s new career transition easy, constantly chastising her.

Still, Kate is compelled to stick things out, feeling a connection to her adorable charge’s abandonment and isolation. If creepy whispers in the night and ghastly apparitions in reflections aren’t enough to scare Kate, her resolve will surely be tested once Flora’s headstrong 15-year-old brother Miles (Finn Wolfhard) unexpectedly returns home from boarding school. Beneath the mop of jet-black curls on his head hides a devilish spirit. He’s a spoiled rich kid possessed with toxic masculinity as taught to him by his role model, riding instructor Quint (Niall Greig Fulton), who perished suspiciously but whose spirit still haunts the place. Kate is soon mentally pushed to the brink, besieged by terrifying nightmares and the taunting pranks of the kids.

Though this iteration doesn’t hold a candle to the 1961 masterpiece “The Innocents” — nor to any of its other cinematic predecessors, for that matter — its modern commentary can occasionally be absorbing. Screenwriters Chad Hayes and Carey W. Hayes (“The Conjuring”) position Kate and Mrs. Grose as two conflicting female forces. These characters are illustrations of the picture’s larger themes: that women can either be driven insane if they aren’t believed, or succumb to denial as it festers internally like a disease. Their relationship dynamic provides an anchor, illustrated not only in the narrative but also through Leonie Prendergast’s costume design. Kate’s youthful cheer in her colorful clothes stands in stark contrast to Mrs. Grose’s gray-toned garb. Later, we can chart Kate’s decaying psychosis through the shifting palette of her wardrobe, turning from spring-like corals to darker autumnal colors.

Whenever Kate descends into her madness, Sigismondi stylizes the sequences with gauzy flourish. She deftly demonstrates that often the most horrific details lurk in the shadowy recesses. Kate’s hide-and-seek game in the east-wing basement provides atmospheric anxiety. During daylight frights, Sigismondi and cinematographer David Ungaro further emphasize the aesthetic tether of light and shadow when Miles savagely stomps on a dying koi as the surrounding tree coverage diffuses the golden hour sun on his face. This is also the sequence in which Wolfhard’s performance as a proto-goth teen with angsty attitude is the strongest. Davis’ nuanced work and Prince’s mischievous sweetness that hints at something more sinister both elevate the material as well.

That said, the filmmakers over-stuff the story with superfluous details to contemporize the timeless tale. Things like demarcating the year this takes place (in the mid-’90s, as Gen X dreams dissolved in the wake of Kurt Cobain’s suicide, which is referenced), a #MeToo plot thread, and a deliberately ambiguous ending that’s either confusing or stupidly straightforward depending on the lens through which it’s viewed don’t add up to much. The unreliable narrator aspect is also botched. Foreshadowing is clumsy, not in the sense that the filmmakers give everything away too early (though one might have a sneaking suspicion), but in the way it fails to layer in the elements for a thrilling finale. As is, the ending tends to invalidate much of what came before, becoming a cheap cheat.

After being turned into a ballet, opera, and Broadway play, and with yet another adaptation debuting later this year as a Netflix series, it’s clear that James’ literary masterpiece has staying power. But with this regurgitation, it’s the audience who gets screwed out of an experience that truly haunts past the end credits roll.