“What? What is happening? Like, Trace, we’ve called it,” Smith can be heard saying to Trace Gallagher in a leaked video clip 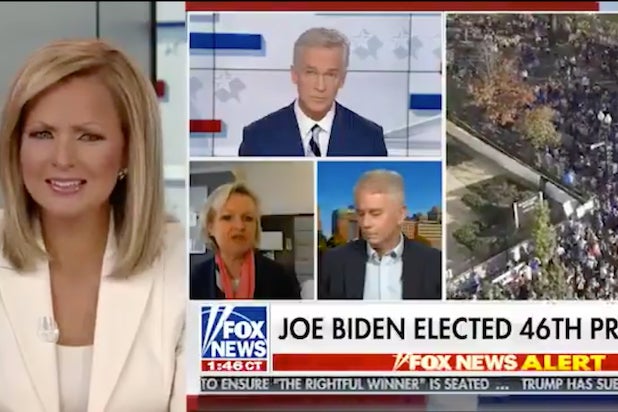 Fox News’ Sandra Smith was caught on a hot mic expressing disbelief that a guest on “America’s Newsroom” was casting doubt on the network’s projection of a Joe Biden victory – and that the show’s host, Trace Gallagher, wasn’t pushing back.

In a clip that appears to come from a leaked raw feed of a Saturday airing of “America’s Newsroom,” according to Mediaite, Smith can be seen furrowing her eyebrows and making a face when the guest, conservative attorney Cleta Mitchell, says, “Just because CNN says or even Fox News says that someone is president, doesn’t make them president.”

“What? What is happening? Like, Trace, we’ve called it,” Smith can be heard saying, off-air, in the clip to Gallagher, who was interviewing Mitchell.

“So I think everybody wants to know that this was done properly and legally and that we can trust the results. And I think we have to look into every one of these concerns,” Mitchell continues in the clip.

On-air, Gallagher does not appear to push back on Mitchell’s claims and says, “I think Cleta makes a very good point there.”

A spokesperson for Fox News did not immediately respond to TheWrap’s request for comment.

Related posts:
Latest News:
Nordstrom ad for $740 gown mocked as 'murder dress' by fashion critics
Trevor Noah slams Democratic politicians as 'hypocrites' for ignoring their own coronavirus rules
Yungblud Opens Up About His Album Weird!, His 'Violent' Childhood and 'Pushing Boundaries'
I’m a Celeb boss hints show will remain in Wales next year – even if Covid ends
Recent Posts
This website uses cookies to improve your user experience and to provide you with advertisements that are relevant to your interests. By continuing to browse the site you are agreeing to our use of cookies.Ok