Game of Thrones actress Esmé Bianco is the latest woman to come forward with abuse claims against her ex Marilyn Manson.

In a new interview with New York Magazine on Wednesday, the 38-year-old claims Manson sexually assaulted her without consent, once “repeatedly cut her torso with a knife,” and was disturbingly violent while shooting a music video.

She also said he controlled all aspects of her life while they were together. She further added that in the beginning, Manson was a “massive role model who really helped me through some incredibly dark and difficult time as a teenager” that later turned into “a monster who almost destroyed me and almost destroyed so many women.”

Bianco, best known for her role as Ros in the first few seasons of GOT, met the singer in 2005 through his then-fiancée Dita Von Teese, with whom she performed burlesque. They remained friendly for years, and in 2009 he hired her to star in the music video for the song I Want to Kill You Like They Do in the Movies — and she says that was the first time she experienced violence at his hands.

The former burlesque dancer claims Manson told her the video was a “kidnapping” plot and would require her to “pretend to like being manhandled by me” on set. But things eventually took a scary turn. The set was his home, and the video (which we don’t remember and cannot find anywhere online) was shot on just a phone camera. The then-26-year-old endured abuse and lack of food while being trapped wearing lingerie for three days. In the piece, she alleges Manson whipped her, tied her up with cables, and used a vibrator called a Violet Wand on her (the same device Evan Rachel Wood described) to the point of injury — all without any discussion of consent.

She says afterward she was upset about the “shoot” — but felt like she and Manson had a bond, and that her wounds were proof.

Over the next couple years she say Manson several more times as they had what she describes as a long-distance affair. The thing is, the rocker was having the same experience with several women. Per his personal assistant Ashley Walters, who also spoke to NY Mag, he was inviting multiple women during this time period to his home for “shoots” or “music videos.” She would also arrange for women to meet him at hotels while he was on the road:

“I was basically giving him a schedule of who’s at what hotel. I didn’t know how far the violence was going at the time.”

In 2011, Manson actually offered to help out Bianco by inviting her to stay with him while she worked to get her visa. He was very sweet at first, she says, showering her with attention. This is what’s called a “love bomb” in abuse victim help groups.

When she moved in with the 52-year-old performer, Bianco claims, is when he started a cycle of mental abuse and humiliation, such as managing what she wore and when she could leave his apartment:

“I basically felt like a prisoner. I came, and I went at his pleasure. Who I spoke to was completely controlled by him. I called my family hiding in the closet.”

Bianco even recalled an incident in which the artist continuously played one of her nude scenes from the GOT pilot “on a projector for guests” and would call her “a whore” in front of them. For those who don’t know, the English model was known for being the focus of many of the HBO hit’s early “sexposition” scenes before her character blossomed into a spy. 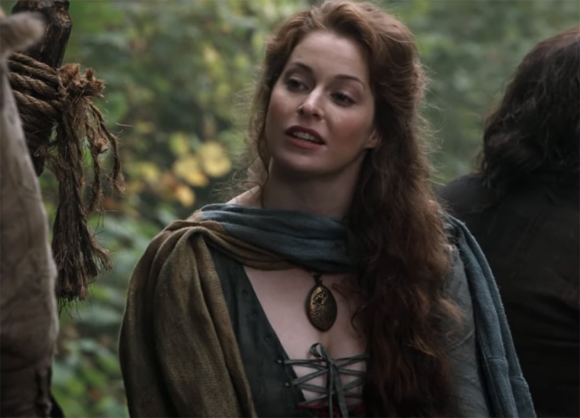 That was not the only time other people were around to witness her abuse. In fact, Bianco points out Manson made degrading and violent comments toward women on a regular basis, something that fans and record executives alike ignored:

“He’s told the world time and time again, ‘This is who I am.’ He hid in plain sight.”

Bianco believed the two were being monogamous during this time, something she would later discover was not even close to true. Walters, his assistant, says she was tasked with keeping an eye on Bianco whenever he was sleeping with other women to make sure she didn’t see.

Friends noticed bruises on Bianco’s body but didn’t know if they were from abuse or consensual sexual activity — and were afraid to ask. Even if they had, the actress believes she wouldn’t have told them the truth or accepted any help:

“I think I would have made excuses for him. I was in survival mode at that point, and my brain had taught me to be small and agreeable.”

She even found for the outlet an old text message she had sent Manson about the scars he gave her:

“Everytime I move they hurt so good thinking of you”

“Now, when I think about that, I’m so ashamed. I was desperately trying to please him and to keep myself out of trouble.”

By June 2011, Bianco says she left Manson’s apartment after he chased her around with an ax. She later broke up with him and now claims that the relationship left her with both physical scars and PTSD.

Bianco blames the panic attacks and night terrors she continued to suffer for her inability to continue her acting success following GOT:

“I couldn’t step up to meet that moment in my life because of what he’d done to me.”

Bianco now joins an chorus of men and women who have recently come out with allegations against Manson, including Wood, Corey Feldman, and Ellie Rowsell. In case you didn’t know, she and Wood previously worked to advocate for California’s Phoenix Act, which essentially extended the time a domestic abuse survivor has to report or press chargers against their abuser. At the time she went public with her story of abuse — but like Wood didn’t name her abuser. She did, however, post a photo of the scars Manson gave her during that first “music video shoot.”

We warn you, this could be especially triggering:

Bianco is now willing to name Manson and indeed has no problem calling him a “serial predator.”

“He’s not a misunderstood artist. He deserves to be behind bars for the rest of his life.”

Manson has since denied the claims made by those who have come forward, calling them “horrible distortions of reality.” As of now, he has been dropped by his talent agency CAA, as well as as his record label.

What do U think about this latest development? Let us know in the comments (below)!