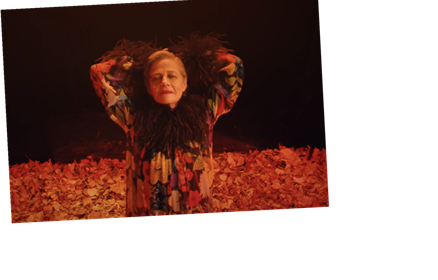 Gaspar Noé hasn’t made an appearance behind the camera since 2019, when he released his Saint Laurent-produced mockumentary-style film “Lux Æterna” at Cannes, the French provocateur’s usual stomping grounds for unsettling fare like “Climax” and “Irreversible.” “Lux Æterna,” starring Charlotte Gainsbourg and Béatrice Dalle as themselves making a film about witches, hasn’t reached U.S. shores yet. But Noé’s latest Saint Laurent-produced creation might just give you a taste of what that film’s up to. Watch below.

Noé’s new short, clocking in at just under eight minutes, is anything but a for-hire assignment. Instead, it’s a wholly Noé-esque experience and totally disorienting, even on a small screen. Oh, and it stars icon Charlotte Rampling, bedecked in fabulous couture and haunting the halls of a crimson-dipped mansion sprawling with eerie atmospherics.

“A world bathed by a red, hazy, velvety light, reminiscent of the glory years of Giallo,” said a press release courtesy of Saint Laurent. “Dreaminess and tension, decadence and danger.” That could apply to almost any Noé outing, from “I Stand Alone” to “Enter the Void,” both of which owe debts to the Giallo school of shock-house cinema.

Here’s what IndieWire had to say about the making of “Lux Æterna,” which bears stylistic similarities to the Saint Laurent short: “It’s hard to imagine that Noé could serve any master other than himself, and it comes as no great surprise that his recent assignment to make a 15-minute commercial for Yves Saint Laurent went awry when Noé turned it into his own weird thing: ‘Lux Æterna,’ a 50-minute psychedelic mockumentary about a film shoot gone wrong, distills Noé’s talents to a more palatable serving size. Anyone who appreciated the craft of ‘Enter the Void’ but found the running time unwieldy will be grateful for this much tighter dose.”