Gay Men’s Chorus at Indie Spirits Confirms What We Knew All Along: Laura Dern Is a Gay Icon 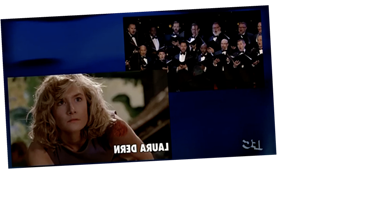 The Film Independent Spirit Awards on Saturday afternoon in Santa Monica got a pep in its step when the Gay Men’s Chorus of Los Angeles took to the stage inside of the tent and delivered what can only be described as a totally epic and hilarious tribute to the gayest moments in film of 2019. That culminated in an ode to “Marriage Story” Best Supporting Actress Oscar nominee and all-around screen icon Laura Dern. Count “Laura Dern ordering a kale salad” and “Laura Dern dressed slutty in court” — referring to her lurid performance as hotshot lawyer Nora Fanshaw in “Marriage Story” — among 2019’s gayest movie moments. Watch the video below.

The Indie Spirits performance — sure to go down in the hall of fame of all-time greatest Indie Spirits moments — followed an otherwise tame afternoon first introduced by deadpan host Aubrey Plaza in a monologue introduction that took aim at the Academy for blowing it in the diversity department. She did her very best to offend everyone involved. “Jennifer Lopez is here you guys. She just played the Super Bowl last weekend. What did you do, Mary Kay Place? Nothing, because you’re a lazy sack of shit! Just kidding, you’re a national treasure,” she said.

Along with the song touting the greatness of Laura Dern, the Spirits show presented images from some of Dern’s most iconic work, from “Wild at Heart” to “Blue Velvet.” “Marriage Story” later picked up the Robert Altman Award. Dern’s prior “Marriage Story” wins — surely to soon include an Academy Award after Sunday night — include the Golden Globe for Best Performance by an Actress in a Supporting Role in a Motion Picture, the EE BAFTA for Best Supporting Actress, and the Screen Actors Guild Award for Outstanding Performance by a Female Actor in a Supporting Role. Since starring as Renata Klein in 2017 on HBO’s iconic drama series “Big Little Lies,” which also earned her a Primetime Emmy Award for Outstanding Supporting Actress in a Limited Series or Movie, Laura Dern has enjoyed something of a renaissance after decades of cult roles in the work of David Lynch.

See all the winners of the 2020 Film Independent Spirit Awards here, and scroll through a gallery of blue-carpet looks also. The stream below comes courtesy of The Hollywood Reporter.