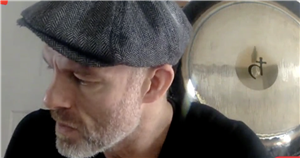 Gladiators star James Crossley was close to tears in an emotional interview with Daily Star when remembering past injuries he had suffered on the ITV programme.

The 48-year-old became overwhelmed when chatting about his dislocated shoulder that almost prevented him from gaining the title of The Ultimate Gladiator in 2000.

Despite the painful setbacks, James was crowned the winner of the intense showdown against the other UK giants.

His sheer determination had come back to haunt him later life, with the star explaining that he still suffered with his shoulder.

At that pinnacle moment in his career, the 2018 World Record breaker actually believed he had been "bionic".

On day one of the initial heats, James was instructed by ITV chiefs to go to hospital but he refused treatment, telling them: "I will lose my arm and win this show."

Reflecting back to that moment in his life, James struggled to get his words out as he became "quite emotional" while speaking to Daily Star during a Facebook Live interview.

When asked about whether his injuries were the worst part of Gladiators, James said: "Yeah I mean, I dislocated it six times."

James added: "So in the first event of the Ultimate Gladiator I dislocated my shoulder and this is when we talk about competitive, they wanted to pull me and take me to hospital and I said 'I will lose my arm and win this show'.

"And I would have done at that time. It meant so much, I’m actually getting quite emotional about it.

"But that’s the mentality that I was in. It was hard with the injuries."

He wasn't just upset about his own injuries and opened up about how "horrific" it had been to watch fellow co-stars being tragically "knocked down".

The door was slammed on the careers of Helen O' Reilly (Panther), Diane Youdale (Jet) and Kate Staples (Zodiac) – who all had to exit the programme after suffering serious back and neck injuries.

When asked if his shoulder still caused issues, James replied: "Yeah I'll have problems with it forever but the thing is there is always a way round it.

"I do this Fit At 40 campaign and I do a lot of yoga now and I teach gong bath, you've just got to move your goals and change sideways and you have to accept your body for what it is."

Thinking back to when his injury issues began, the TV star remembered feeling like he had been superhuman – with the show's main producer even remarking about his seemingly invisible persona.

He said: "At that point I remember Nigel Lythgoe coming up to me and saying 'I thought that you were bionic'.

"And I genuinely believed that I was bionic, you know I had that mentality and after that you realise you’re actually human and then you have to start taking care of your body."

James warned: "This is what I'm trying to push nowadays – especially when you're over 40, this is when you can really start having health problems."