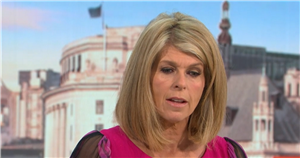 Good Morning Britain presenter Kate Garraway believes she "failed" her children when it came to home schooling throughout the pandemic.

It comes as she and co-host Ben Shephard welcomed an additional debate on A Level results and home schooling, with a question arising as to whether home schooling is actually better for young people.

Kate immediately shut it down as she recognised that home schooling doesn't work for everyone, with the 54-year-old stating that she "failed" her children.

She recognised that her circumstances were different, referring to her husband Derek spending most of the pandemic in hospital with Covid-19, but she believed her children would have received a stronger education in school.

2020 has been challenging for Kate's family after Derek spent a lot of time in hospital, making him one of the people in the UK who has suffered with the long term effects of coronavirus since he was diagnosed.

Speaking on the show this morning, she said: "I know that I have frankly failed my children in supporting them with home schooling.

"I know I had a very specific set of circumstances going on for the bulk of the time but I found it very difficult to get online and help them work their way through the system. It was very, very challenging."

After Kate's comment, Ben Shephard said he believes that children are having their achievements "undermined" by the public.

Speaking of his own son, Ben added: "I know from Sam doing his GCSEs how hard he has worked and the A Level students as well they have been continually assessed all the way through.

"Sam didn't sit one exam like he would have done for his GCSEs, he must have done five or six for every subject because they wanted to make sure they had a fair assessment for how he had done."

He added: "I really don't like the idea that students who have worked seriously hard from their perspective they have just dealt what is in front of them and been undermined by all of us questioning whether Gavin Williamson has done the right thing."

Viewers praised him for his comments as they shared their disappointment for their children's grades being undermined as their youngsters head off to the university of their choice.

It follows a challenging time for the education sector which saw a lack of in-person teaching throughout the pandemic.