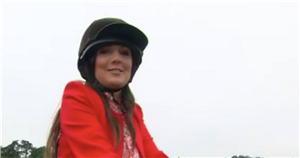 Good Morning Britain viewers were totally baffled as Laura Tobin took to the back of a camel to present the weather on Monday's show.

The 39 year old weather forecaster looked a tad uneasy as the camel began to kneel as they came to halt.

Laura screamed and lunged forward as the animal came closer to the ground but fortunately managed to stay in her seat.

Back in the studio, Ranvir Singh and Richard Bacon were left speechless as they attempted to move on with the programme, however Mastermind host Clive Myrie questioned the bizarre segment.

He said: "I've got a question why is your weather lady on a camel?"

It wasn't just Clive who had been left confused as fans swarmed Twitter with their views.

One online user wrote: "There's a lady on a camel, doing the weather, on my telly #GMB What the HELL is going on?"

Another added: "What happened to just showing the weather and not riding random camels?! #gmb."

A third asked: "Why is Laura dressed for a fox hunt?"

"She's on a camel ffs #gmb," chimed another.

While a fifth said: "What happened to just showing the weather and not riding random camels?!"

Meanwhile, GMB fans have been incredibly impressed with Richard Bacon who stepped in to replace Piers Morgan.

One person begged: "Richard Bacon please stay. Watched him last week too and he's the best presenter since Piers…#GMB."

Another added: "Richard Bacon is weirdly quite good as a presenter #GMB. Never thought I'd say that."

Richard has been one of many fluctuating and stand-in host on the programme since Piers Morgan walked out.

According to sources, ITV producers are trying to test what works best with viewers before making any firm decisions.