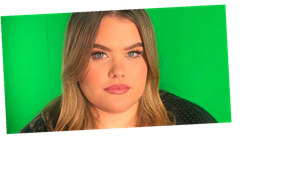 Gogglebox star Amy Tapper has revealed how she lost over three and a half stone, putting her transformation down to overhauling her entire lifestyle.

Amy, who sprang to fame alongside her family on the hit Channel 4 series back in 2013, recently unveiled her new look ahead of her upcoming appearance on new show Celebs Go Skating.

And in a new interview, the 20 year old has revealed how she did it and why she’s determined to stick to her new way of life.

She said: “There was nothing specific because I’ve struggled with my weight since I was about eight-years-old.”

“I’ve always tried every diet under the sun, I’ve done everything from shakes to this, to that…” Amy continued in the interview with The Metro.

Continuing that she was in the right headspace to look at her lifestyle and what she wanted to change, Amy added that she’d been able to drop inches as well as weight.

She explained: “I think the gym mainly is what spurred it to properly drop, because I was losing inches as well as weight.”

“That’s what topped it all, just being in that right mindset, in the right zone and doing the right things, eating the right things. Just changing a whole lifestyle rather than doing a really quick fix on shakes and bars that just didn’t… I’d lose two stone and then put it back on the minute I eat an apple.”

Amy concluded: “I think it was just the right time, the right age, my mind was exactly where it needed to be. I was really on it, and still am.”

Amy also opened up on the reaction she’d had since posting a photo on Instagram, describing the response as “overwhelming”.

Fans showered her with compliments, telling her she looked “amazing” and “beautiful.”

Speaking about how much their support means to her, Amy said: “It really was amazing, and it’s my followers that keep me motivated to do it more, because then they follow my journey.”

She continued: “I gained so many followers after I posted that, because people want to then see the journey.”

This comes after reports that Amy and her family – dad Jonathan, mum Nikki and brother Josh – have ruled out returning to Gogglebox.

The family left the show in 2018 after five years and are now said to be concentrating on exciting future projects.