The Victorian government will break up the department that led the state's response to the coronavirus pandemic, with Health to be demerged from Human Services.

The separation of the mega department, which is being announced by Premier Daniel Andrews at his press conference, follows concerns that it has become too unwieldy and bureaucratic. 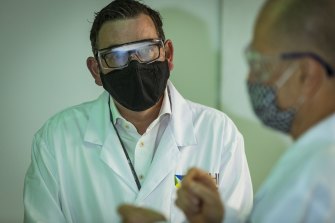 Victorian Premier Dan Andrews will announce the division of the departments of Health and Human Services, which have led the state’s response to coronavirus. Credit:NCA NewsWire / Chris Hopkins

The split reverses a decision taken by Mr Andrews early in his time as Premier, when he merged the two departments in 2015.

The decision is expected to be welcomed by the Opposition, the Australian Medical Association and other health groups.