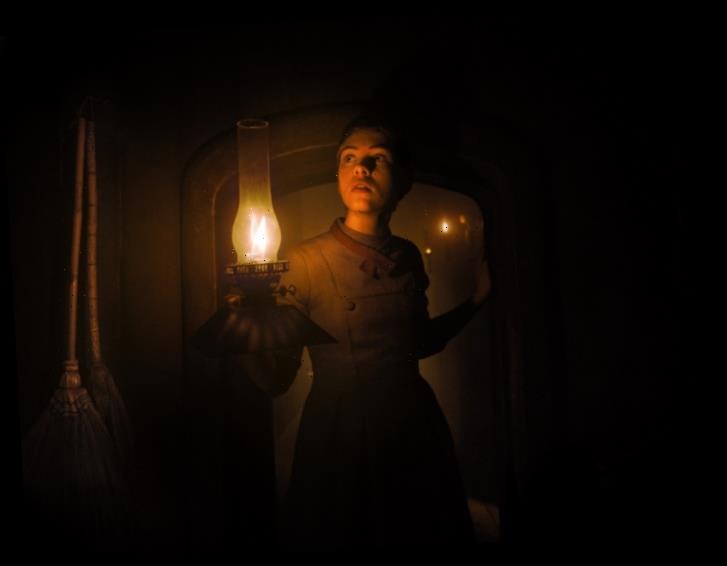 Aside from the odd Oscar contender expanding into wide release, January is not known as a fertile period for film releases, and in particular, the schlocky January horror film has practically become its own genre by now. So perhaps the best one can say about “Gretel & Hansel,” Oz Perkins’ revision of the Brothers Grimm tale, is that it is absolutely not a typical January horror movie.

More ominous than exciting, more bleak than violent, and inspired more by Robert Eggers and Dario Argento than anything in the Hammer and Blumhouse canons, “Gretel & Hansel” is a stylish, impressive-looking attempt to bring some arthouse horror sensibilities to the multiplex, under cover of a PG-13 fairy tale riff. It’s not exactly successful at doing so – in fact, it’s often kind of a mess, especially when it comes to the inexplicable revelations of its third act – but at least credit the filmmakers for having higher ambitions than the film’s release schedule would indicate.

With “It’s” Sophia Lillis in the lead role, “Gretel & Hansel” has switched the order of those titular names for a reason. In this version, Gretel is a diaphanous, wise-eyed 16-year-old, and her brother Hansel (Sammy Leakey) is a cute but helpless eight-year-old whom she’s been tasked with protecting. Set in a geographically unspecified storybook realm – British accents, like modern idioms, cycle in and out of usage – these two have been left to fend for themselves after their father dies and their mother slips into a deprivation-related madness, ordering her children off to the woods. (“Dig yourselves some pretty little graves, and dig one for your mother too,” she offers as valedictory advice.)

The two siblings find the wider world wildly unforgiving: Gretel’s reptilian potential employer at an inn asks if she’s “kept her maidenhood,” and a quick night’s sleep in an abandoned home leads to an attack and a chase from a zombielike ghoul. (This latter scene – like Lillis’ sometimes intrusive voice-over narration – feels like it must have been added late in the development process, as it’s the only time the film will indulge in straight B-movie action and jump scares.) Saved by a kindly huntsman (Charles Babalola), the two children are directed toward a distant convent, far off into the woods.

Lillis plays Gretel with a hushed intensity, letting her words and her gaze trail off in unexpected directions, and it’s quickly suggested that she possesses some sort of second-sight, experiencing vivid dreams and premonitions of hooded figures stalking the thick, foggy forest around them. After much wandering, complaints of hunger, and a shared psychedelic experience after eating some mushrooms, the two children come upon a surprisingly modern A-frame house in a clearing: inside, a giant banquet has been left out for no one in particular.

Living here is the mysterious Holda (a delightfully creepy Alice Krige). A sharp-tongued, elderly crafter of various cold-pressed juices, she regards Hansel with obvious intentions – sniffing his hair and practically licking her lips as she encourages him to eat more and more – and Gretel with much more nebulous ones. The two stay there for longer and longer, continuing to enjoy Holda’s mysterious bounty, as Gretel’s dreams turn ever more menacing, and Holda starts to worm her way under Gretel’s skin.

Mostly devoid of humor aside from one very surprising one-liner at a climactic moment (you’ll know it when you see it), the film, scripted by Rob Hayes, has some genuinely promising ideas in mind, at times prodding around the edges of a full-on feminist re-imagining of the fairy tale witch. But it never manages to reconcile its deeper interests with the need to hit some of the more obvious genre paces.

The film certainly looks nice, with a wealth of eye-catching compositions: the camera always finds the most disorienting possible perspective as the two children pass through the forest; cinematographer Galo Olivares imbues Holda’s house with an amber glow that is simultaneously warm and sickly; composer Rob’s score leans heavily on Goblin-style synths; and production designer Jeremy Reed splits the difference between the antique and the modern with effectively unsettling results.

The problem is that so many of its virtues feel compromised. At 87 minutes, it feels either too long or too short, returning to its more ominous imagery often enough that the impact starts to dull, but never properly digging into some of the richer veins it begins to tap. Even considering the source material, it is at times almost overwhelmingly grim – though it doesn’t contain much in the way of upfront gore or violence, the fact that this film skated by with a PG-13 rating while the likes of “Marriage Story” and “Rocketman” were recently saddled with an R should give critics of MPAA standards much to discuss – which only makes its pulled punches in the finale more obvious and unsatisfying. And for all of the care that went into its look and its sound, the world of the film never feels more than halfway formed; in the rush to tie up its narrative loose ends, it leaves its more intriguing thematic ones hanging.