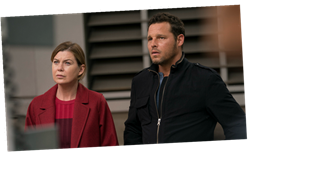 On Thursday’s nostalgia-filled hour, titled “Leave a Light On,” the series said goodbye to Alex Karev, the character Chambers played for more than 15 seasons, finally revealing — after weeks of skirting around his true whereabouts — the truth of what happened to the beloved doctor. Alex wrote personal letters to Meredith (his “person”); his wife, Jo; Webber; and Bailey, explaining why he wasn’t returning to Seattle. In his letters, Alex revealed he was happily together with Izzie Stevens(!) — a character we haven’t heard from in over a decade — and that they were happily raising their two 5-year-old children(!) on a farm with horses in Kansas.

That is the sound of jaws dropping at that stunning development. Chambers did not return to film new footage for his goodbye. Instead, the actor provided voiceovers as he read off Alex’s letters to the four most important people at Grey Sloan. In the end, Alex revealed in his letter to Meredith that he would not be returning to Seattle, sharing that “the one perfect thing isn’t in Seattle, not anymore,” it was with Izzie and their kids. “I’m finally exactly where I should be. I never had that before,” Alex closes his letter to Meredith.

“It is nearly impossible to say goodbye to Alex Karev. That is as true for me and for all of the writers at Grey’s Anatomy as it is for the fans,” showrunner and executive producer Krista Vernoff said in a statement to ET following Thursday’s episode. “We have loved writing Alex. And we have loved watching Justin Chambers’ nuanced portrayal of him.”

“For 16 seasons, 16 years, we have grown up alongside Alex Karev. We have been frustrated by his limitations and we have been inspired by his growth and we have come to love him deeply and to think of him as one of our very best friends,” Vernoff continued. “We will miss him terribly. And we will always be grateful for his impact, on our show, on our hearts, on our fans, on the world.”

In a shocking move, Chambers announced in January that he was leaving Grey’s after playing Alex for more than 15 seasons, citing a desire to “diversify [his] acting roles.” The series’ 350th episode, which aired Nov. 14, was Chambers’ last appearance on the show.

“There’s no good time to say goodbye to a show and character that’s defined so much of my life for the past 15 years,” the actor said in a statement to ET. “For some time now, however, I have hoped to diversify my acting roles and career choices. And, as I turn 50 and am blessed with my remarkable, supportive wife and five wonderful children, now is that time.”

“As I move on from Grey’s Anatomy, I want to thank the ABC family, Shonda Rhimes, original cast members Ellen Pompeo, Chandra Wilson and James Pickens [Jr.], and the rest of the amazing cast and crew, both past and present, and, of course, the fans for an extraordinary ride,” Chambers added.

Chambers’ sudden exit prompted Pompeo to briefly react to the news one day after it broke. Responding to a tweet by Vanity Fair that read, “#GreysAnatomy is about to feel one of its biggest losses yet,” the 50-year-old actress and executive producer couldn’t help but share her thoughts on the situation.

“Truer words have never been spoken,” Pompeo tweeted, alongside a brokenhearted emoji, conveying her emotions over losing one of the Grey’s OGs.

Relive some of Alex’s most memorable moments on Grey’s in the retrospective video below.

To stay up to date on breaking TV news, sign up for ET’s daily newsletter.