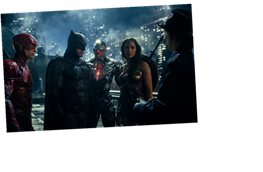 HBO Max is launching this week, but the new streaming platform won’t have its biggest title until 2021. That title is Zack Snyder’s personal cut of “Justice League,” commonly referred to across the internet as the Snyder Cut. Fans have been urging Warner Bros. to release the Snyder Cut since Snyder exited the film in post production because of a family tragedy. Warner Bros. brought in Joss Whedon to complete the film and oversee reshoots. Whedon drastically changed the tone of Snyder’s original, unfinished vision. Now Snyder will see that vision through with his “Justice League” cut, set to debut on HBO Max in 2021.

In a new interview on the “Recode Media” podcast, WarnerMedia chairman and HBO Max boss Bob Greenblatt confirms the Snyder cut does not exist at the moment and it’s something Snyder has to create over the next year. Original repots pegged the Snyder cut budget around $20-$30 million, but Greenblatt says the studio will only be so lucky if the cut can be produced for as much as $30 million. In other words, the Snyder cut will most likely exceed the $30 million mark. The theatrical “Justice League” cut cost Warner Bros. an estimated $300 million to produce, market, and distribute.

“It isn’t as easy as going into the vault and there’s a Snyder Cut sitting there to put out,” Greenblatt said. “It does not exist. Zack is actually building it, and it’s complex, including new VFX shots. It’s a radical rethinking of that movie and it’s complicated and wildly expensive. I’ll just say I wish it was just $30 million and stop there. It’s an enormous undertaking and very complex.”

Zack Snyder is reuniting with the “Justice League” crew to complete his vision of the movie, while reports say cast members such as Ben Affleck, Jason Momoa, and more could be brought in to record new dialogue. Snyder’s cast has been vocally supportive of the cut for some time now.

“Since I got here 14 months ago, the chant to #ReleaseTheSnyderCut has been a daily drumbeat in our offices and inboxes,” Greenblatt said last week when the Snyder cut was officially announced. “Well, the fans have asked, and we are thrilled to finally deliver. At the end of the day, it really is all about them and we are beyond excited to be able to release Zack’s ultimate vision for this film in 2021. This could never have happened if it weren’t for the hard work and combined efforts of the teams at HBO Max and Warner Bros. Pictures.”

HBO Max has not announced a release date for the Snyder cut outside of 2021.