When it was released last year, Halsey’s acclaimed album If I Can’t Have Love, I Want Power, found the US singer shedding the polite sad-girl pop of her previous three albums to embrace her identity as a woman, a mother and a seductress, with the support and encouragement of Nine Inch Nails’ Trent Reznor and Atticus Ross.

The songs were lustrous with spectral piano, driving synths, and apocalyptic and biblical references. Halsey fans may have heard it all anew, but for those of us who dressed like Robert Smith or Siouxsie Sioux-meets-Beetlejuice in clubs like Melbourne’s Abyss, Subculture or Cabaret Nocturne or Sydney’s Club 77 and Hellfire Club circa 1998 to 2010, it was thrillingly familiar. 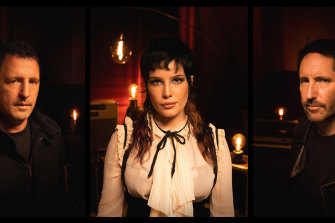 In the same way that everything ’90s is new again, so is gothcore (or “undead, undead, undead” in the timeless words of Bauhaus’ Peter Murphy). Sandwiched between the New Romantics and the synth-driven late-‘80s and the rave explosion of the ’90s, the gothcore sound is all big metal guitar riffs, swirling panoramic synthesizers, a pounding dance-floor beat and thunderous, malevolent bass lines.

If there’s any doubt about its resurgence, Nine Inch Nails headlining tours throughout Europe with Nitzer Ebb, Ministry’s return to touring, UK post-punk pioneers Bauhaus’ reformation, and gloom icons The Sisters of Mercy’s upcoming Australian dates leave no doubt the synth-goth sound that blitzed through ’90s clubs like Doc Martens and a whole lot of eyeliner is back in a big way.

At a glance, the revival makes sense. As the planet continues to heat up and we negotiate a life in which pandemics come in waves as a matter of course, a younger generation of listeners have connected with the genre’s melancholic tragi-drama. 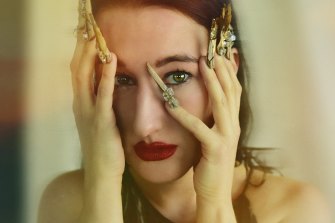 Zola Jesus’ new album Arkhon is due out on June 24.

Relying on primarily bass and minor chords, the genre emerged, most notably in the UK, from the 1970s post-punk scene. Borrowing the snarling bass and tribal percussion from their post-punk predecessors, goth bands took their lyrics into a more existential, supernatural realm. Bands like Theatre of Hate and The Sisters of Mercy delivered their nihilistic, gloom-laden response to Britain’s late-’70s Winter of Discontent, where “the old order was dying and the new was struggling to be born,” as Phil Tinline wrote for the New Statesman.

Forty years later, as Vladimir Putin aggressively attacks Ukraine under the auspice of “de-Nazification”, China and Iran continue to silence dissent, and governments globally take advantage of pandemic conditions to increase their authoritarian measures, is it any wonder those dusty Siouxsie and the Banshees albums are resonating anew?

But gothcore, encompassing bands old and new, is multi-faceted. Whether it’s the melodic dark-wave of US bands Health and Crosses, solo stars Zola Jesus and Chelsea Wolfe, or the post-punk whiplash of locals Bitumen and Party Dozen, there’s a wealth of snarling, seething, sultry new albums recently released and forthcoming.

On that same melodic-meets-metal bent, Crosses – Deftones frontman Chino Moreno’s side project with Shaun Lopez – have released two new songs this year: the throbbing, ragged-edged Initiation, and the macabre lullaby Protection. Crosses haven’t released an album since 2014, but have promised these two singles are merely appetisers. Fans of Deftones and NIN might also revel in the malevolent, haunting post-metal of Squeeze, US artist Sasami’s second album, or Chelsea Wolfe’s harrowing drone metal. Wolfe is touring nationally from June, and her live show is renowned for surging with soul-storming emotional drama.

Also heavy, but steering into industrial EBM (electronic body music) territory, Massachusetts duo Boy Harsher – made up of Jae Matthews and Augustus Muller – released The Runner earlier this year. It was not a typical album in the vein of their unmissable 2019 release Careful, but a soundtrack to a short horror film they also wrote and produced. It is cinematic, luscious and nightmarish, but all the while throbbing with dance-floor energy. 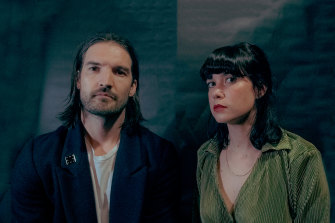 Just as savage but much more oriented towards synths and a percussive core, Melbourne’s Bitumen are redolent of the industrial electro, glossy ’80s new wave sound. Boasting Kate Binning as their charismatic songwriter and vocalist, Bitumen’s Cleareye Shining, released earlier this year, is another must-listen for anyone discerning and dark-hearted.

Wherever economic, social and political injustice reigns, expect savage guitars and violent sonic dissonance. Because if we can’t fix the system, we can at least party like we’re all going to hell and this is the final, bloody hurrah.

To read more from Spectrum, visit our page here.