In a stunning turn of events, Bill Cosby is set to be released from jail after Pennsylvania’s Supreme Court overturned the ruling that found him guilty of drugging and molesting Andrea Constand back in 2004. The initial ruling was a victory for Constand as well as the 60 actresses, models, and acquaintances of Cosby who accused him of sexual assault and rape over the past few decades, but this is now being recalled. 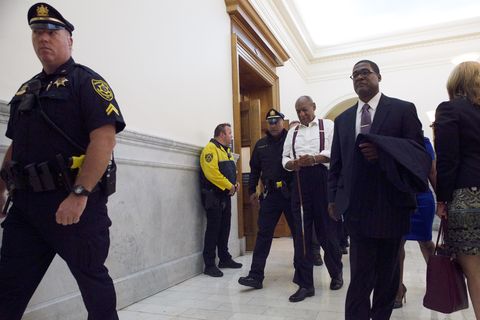 Wait…how the hell did this happen?

Former defense attorney Bruce Castor (aka one of Donald Trump’s impeachment attorneys), apparently promised Cosby in a written deal that he wouldn’t be prosecuted for the sexual assault of Andrea Constand. Under the deal, Cosby was asked to testify in a civil lawsuit filed by Constand in exchange for avoiding prosecution. After coming to this deal, Cosby agreed to waive his Fifth Amendment rights (aka his refusal to testify in court for the entirety of his trial).

On Wednesday, the Pennsylvania Supreme Court decided this deal should’ve prevented Cosby from being charged in the Constand case in the first place, which means the courts can’t continue to uphold the rest of Cosby’s 10-year prison sentence.

What exactly did the Pennsylvania Supreme Court say?

The divided court ruled that Cosby was denied a fair trial because of the agreement with the previous prosecutor. Here’s how the Pennsylvania Supreme Court’s official documentation on Cosby’s release puts it:

After being convicted initially, Cosby refused to offer any words to Andrea Constand and instead vowed to serve all 10 years of his prison sentence. He only ended up serving two before his conviction was overturned.

Is Cosby still in jail? When will he be released?

Because of the court’s decision, Cosby could be released as soon as today.

“Work is underway to complete the necessary paperwork,” Pennsylvania Department of Corrections staffer Maria Bivens told The Philadelphia Inquirer. “Mr. Cosby will be released as soon as practical.”