His heroics on January 6 were not forgotten.

He had two very important, but two very different jobs in Washington this month.

Hero cop Eugene Goodman, who went viral for his valor during the Capitol riots, escorted Vice-President Kamala Harris to her inauguration on Wednesday.

Officer Goodman was seen providing a vanguard for the about-to-be sworn in VP, and her husband, America’s first ever Second Gentleman, Doug Emhoff. 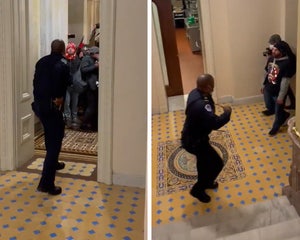 Goodman’s actions on January 6 were seen far and wide when a video of him single-handedly holding off a mob of frenzied Trump supporters went viral.

Not only that, closer inspection of his split second decisions showed how he, while slowly retreating up the stairs of the Capitol building, recognized the insurrectionists were on a collision course with the unguarded Senate chamber, and consciously drew them away, into the path of reinforcements instead.

A petition started soon afterward to award him with the Medal of Freedom, the highest civilian honor, has since passed 80k signatures (the petition originally called for the Medal of Honor, a military decoration).

A Capitol Police spokesperson told Fox 5 that Goodman’s plainclothes assignment to accompany Harris on Wednesday was “a ceremonial role.″

The Most Viral Moments of Joe Biden's Presidential Inauguration