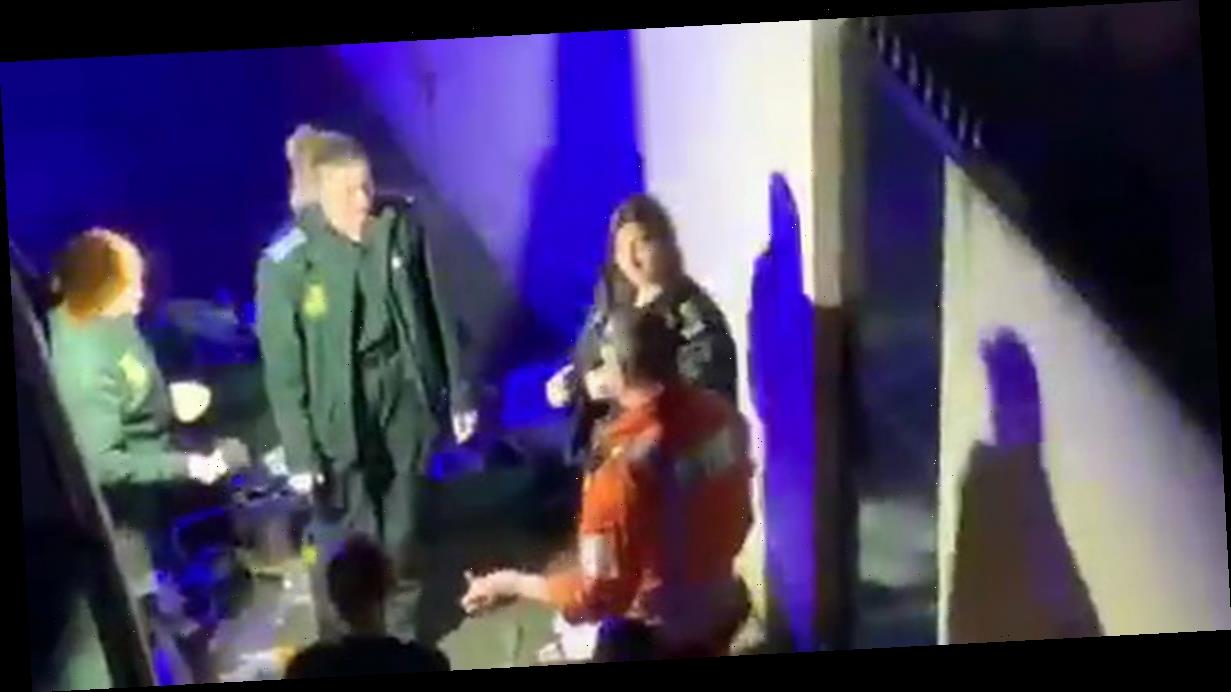 Horrifying video has emerged showing victims of a suspected triple murder lying on the floor at a chaotic and distressing scene.

Footage was recorded after three men were stabbed to death in Seven Kings, Ilford, in east London on Sunday night, with police saying it is likely to be a "triple homicide investigation".

Detectives have launched a manhunt to find those responsible for the deaths, which have sparked shock and outrage following one of the capital's most violent years on record.

Multiple video clips were posted on social media showing bodies on the floor after medics, including air ambulance staff, battled to save the victims' lives, but some clips were removed from Twitter because the content violated its rules.

Did you witness the stabbings or have you been affected? Email webnews@mirror.co.uk.

The three victims, aged in their 20s or 30s, were all found in close proximity to each other and were pronounced dead at the scene.

No-one has been arrested and detectives are keeping an "open mind" about what happened.

Police have sent additional officers to patrol the borough of Redbridge.

In one clip, the bodies of two men, whose clothes have been removed, are covered by white sheets on opposite sides of a road and they are surrounded by medics and police officers.

The floor is covered in medical equipment and the road is filled with police and ambulance vehicles, some with flashing lights.

That clip was later removed.

His video was taken down because it violated Twitter's rules.

The 34-year-old later tweeted: "Sorry if I have upset some people on my video!! Everyone just be careful if you live around Seven Kings, High Street okay."

A Met Police spokesperson said: "An investigation has been launched into the deaths of three men in Redbridge, all of whom had suffered apparent stab injuries.

"At 7.38pm on Sunday 19 January, emergency services were called to a disturbance in Elmstead Road, Seven Kings.

"Officers and London Ambulance Service attended and found three men, aged in their 20s or 30s, suffering what appear to be stab injuries. All three were pronounced dead at the scene.

"Officers are in the process of establishing formal identification and informing all next of kin.

"Post-mortem examinations will be arranged in due course.

"A thorough investigation is underway and crime scenes are in place in the area as officers begin a full forensic examination. This will continue into Monday and potentially beyond."

Detective Chief Superintendent Stephen Clayman, Commander of the Met’s East Area BCU, added: “While enquiries into this tragic incident are at an early stage, this is likely to be a triple homicide investigation.

“We must retain an open mind as to any motive as we are in the early stages of establishing the full circumstances.”

A Section 60 order, giving police greater stop and search powers, was authorised for Redbridge until 8am on Monday.

The London Ambulance Service said it responded to reports of a stabbing outside Seven Kings station.

"Sadly, despite the efforts of medics, three males were pronounced dead at the scene."

Community leaders have told of their shock.

Mayor Sadiq Khan said: "The horrific stabbing in Seven Kings in Redbridge last night is a tragic reminder of the evil scourge of knife crime that continues to plague our entire country.

"I have been working closely with senior Met Police officers, Redbridge council and the local MP on the response overnight, and will do everything possible to support the local community in Seven Kings through this extremely difficult time.

He added: "The only way we will tackle violent crime for good is with laser-like focus on catching criminals by being tough on crime and, just as importantly, by addressing the underlying root causes of violence such as poverty, inequality and social alienation.

"This will require a huge increase in Government funding for public services including the police, youth services, schools, sports facilities and local councils.

"There is simply no other solution to this problem."

"I have been in touch with the Borough Commander & will continue to be throughout the night as police work to catch the perpetrators."

"Knife crime is becoming all too common, we need a national strategy and more police resource now."

Sam Tarry, Labour MP for Ilford South, tweeted: "Heartbroken to find out that three people have been stabbed in Seven Kings, Ilford, tonight."