While discussing his HBO documentary series NYC Epicenters 9/11-2021½ – about the 2001 terrorist attacks and the COVID-19 pandemic – in a recent interview with the New York Times, Lee said he still harbours “questions” about the national tragedy after speaking with so-called September 11 truthers for the project. 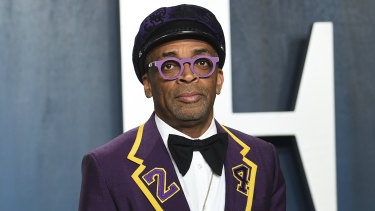 The acclaimed director opted to include commentary in the four-part saga from the Architects and Engineers for 9/11 Truth, a collective of conspiracy theorists who maintain that the collapses of the World Trade Centre buildings were controlled demolitions orchestrated by an inside group rather than a result of the impacts and fires caused by terrorist plane crashes.

Here’s why: “Because I still don’t … I mean, I got questions. And I hope that maybe the legacy of this documentary is that Congress holds a hearing, a congressional hearing about 9/11.”

When pressed to share his position on the widely researched and accepted explanations, the prolific director doubled down.

“The amount of heat that it takes to make steel melt, that temperature’s not reached,” he said. “And then the juxtaposition of the way Building 7 fell to the ground – when you put it next to other building collapses that were demolitions, it’s like you’re looking at the same thing.” 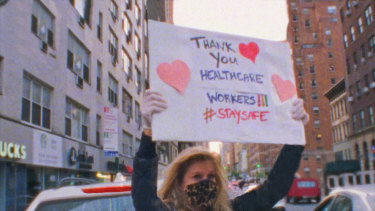 Lee spoke with families of those lost in both 9/11 and the COVID-19 crisis for the documentary.Credit:HBO/Foxtel

“But people going to make up their own mind,” he continued. “My approach is put the information in the movie and let people decide for themselves. I respect the intelligence of the audience.”

Lee, who appears in the documentary, conducted more than 200 interviews for the project, including firsthand accounts from residents, first responders, politicians and journalists alongside his own family and friends, according to HBO.

While speaking with New York-based survivors of both September 11 and the ongoing public health crisis, Lee said he felt a responsibility to ask “tough questions” that triggered emotionally raw responses from interviewees on camera.

“The most moving thing to me, not including archival footage, are the interviews with the people who lost loved ones,” Lee said.

“People just bare their souls. It was very, very emotional. For me, I can’t comprehend what they’re going through. … [It’s] hard to ask questions where you know people are going to break down. That’s not easy; it’s not fun. But I got to ask those questions.”

But not everyone was so willing to open up to Lee, who revealed that the New York Police Dept. refused to participate in the production. Speculating as to why the police force declined his invitation, Lee wryly suspected, “They saw ‘Do the Right Thing,’” his seminal 1989 film about racial inequality and police violence in New York City.

“They don’t look good in this,” he added. “And that footage [of police officers assaulting Black Lives Matter protesters in 2020] does not lie. They were cracking heads.”