Infidelity is never just what you think: Zoe Foster Blake

Zoe Foster Blake is obsessed with infidelity. "I love Esther Perel, I love that TV show Couples Therapy, I just find it is such an incredible thing – it can be such a gift and it can be so destructive. It’s never just what you think it is, there’s so much behind it and underneath it, why people do it."

The writer and skincare entrepreneur is adamant an affair should not automatically mean the end of a relationship. Author of two picture books, four novels and four non-fiction books, Foster Blake is speaking via Zoom from home, where she lives with comedian husband Hamish Blake and their children, Sonny, 6, and Rudy, 3. 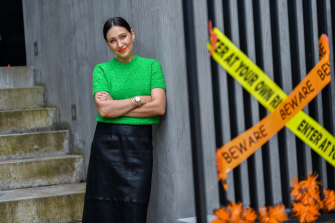 Like most Melburnians, the couple has been through "all the stages" in the past seven months, drinking a lot at the start, ordering takeaway obsessively for a time. Things eventually settled down and now she's just over it, keen to get on with life. Vision of her and Hamish planning a holiday in the new ads they front for Tourism Australia echo all our sentiments.

We're dining on day 100-and-something of lockdown and Sonny has finally returned to school. He’s been happy at home, she says, spending much of the time on the floor playing Lego. "He really never expressed any despondency or FOMO at all, not for a birthday party or a trip to the zoo. He’s a bit of a homebody like his mum."

As a result of COVID-19, she has asked our photographer not to go inside, so he shoots her on the street. Lunch is gyoza and nasi goreng from Richmond’s Sister of Soul, her favourite local vegetarian restaurant, while I have tofu salad from I Dream of Sushi in Moonee Ponds. "Ordering local is almost like a duty," she says, "you know how hard they’re doing it." 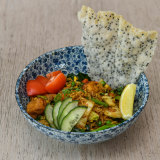 At 40, Foster Blake has hit that point in life when separations are rife. "A lot of my friends are going through crushing divorces and deception that would beggar belief. If I wrote about what these people had done to each other, it would seem stranger than fiction."

Having written a relationship column for Cosmopolitan for years, she’s heard a lifetime's worth of terrible stories about what people do to each other. It’s what inspired her to write the non-fiction Break-up Boss and Love, and Textbook Romance, co-written with Hamish. Her novels, including The Wrong Girl, which was adapted for TV, also explore dating and relationships.

Earlier this year, Audible approached her to write a novella. While a 100,000-word manuscript was daunting, 30,000 or so seemed realistic, even in lockdown. The outcome is Clean Slate, about a bright, shiny young couple who seem to have it all, but nothing is as it seems. Spoiler alert: there are affairs – more than one. Read by the always entertaining Stephen Curry, it is funny despite the bleak subject matter. 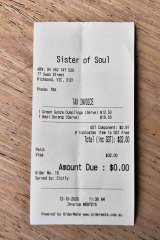 Growing up in Bundanoon, Foster Blake was the last of eight children in a blended family; her father, David Foster, is a writer and her mother, Gerda Busch, is a counsellor at Goulburn Prison. There wasn’t much money, she says, but her parents were self-sufficient – they also wrote a book about it – and it was pretty idyllic. Being five years younger than her nearest sibling meant spending a lot of time by herself; there was no television. "It was pretty much us and our imaginations."

"They were very interesting people and I think we were sort of expected to be able to keep up with them at the kitchen table from an early age. The kind of books I read and the conversations we were having were probably pretty sophisticated."

As a teenager, she’d "basically escape and go somewhere else and not see my parents for the whole weekend, I’d be off, going to a house where there’s junk food and TV."

Very grateful she missed mobile phones, the internet and Instagram in those formative years, she feels for adolescents having to contend with bullying and shaming via social media. "We had Cosmo and Cleo, that was it! If I wanted to feel bad about myself, I just had to read one of those."

Did her dad's work influence her career path? "Yeah – but not. I always laugh – he told me not to write books because there’s no money in it."

Instead, magazines beckoned. After studying media and communications at university, at 23, she landed a gig at Cosmopolitan. They were heady days when magazines sold hundreds of thousands of copies and were virtual bibles for many women. She later moved to Harper's Bazaar as beauty director. 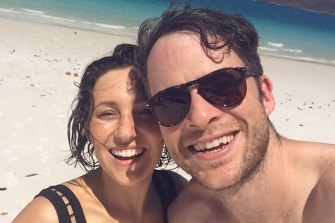 That publishing experience, along with exposure to beauty products and a nascent online industry, inspired her to launch Go-To, an organic skincare range, in 2014. Now also stocked in Mecca stores here and Sephora in the US, it has spawned Bro-To and Gro-To, for men and kids.

When she was writing about beauty, the most sensitive issue was testing on animals. Go-To hit the headlines recently for two of its products not catering to a diverse consumer base – they were subsequently pulled from the shelves. "Now, beauty is political; everything is political," she says.

Despite retail being closed for the past seven months, Go-To sales are up 100 per cent on last year. Customers wanting to buy locally have fed demand; she wonders if increased online sales might continue once restrictions are lifted. "People will be weirded out by big crowds, won’t be going to Chadstone or wherever. We’ll all have a weird PTSD about going out."

Juggling so many projects sounds daunting, especially with two small children. It would not be possible without a nanny three days a week, she says. But it is taxing. "And I don’t even think it should be aspirational if I’m totally honest. It really takes a toll. I think in lockdown it’s probably been exacerbated because I have no compartmentalisation," she says.

"I feel like it’s a sort of a mania; I love making new projects, I get so excited by a new idea and then once it’s out I’m like, bye. I’d like to tone it down a bit – it’d be nice to be a bit more comfortable being idle."

Clean Slate is out via Audible on October 27. audible.com.au/cleanslate