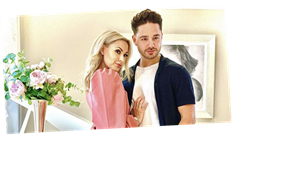 Actor Adam Thomas is perhaps best recognised for his role as Adam Barton on hit soap Emmerdale, with the star joining the cast in 2009.

However you might also recognise Adam for his actor duties in Waterloo Road and Casualty, as well as his current starring role in Don't Rock The Boat.

And as a result of his success, the 32 year old has a stunning place to call home, which he shares with his beautiful wife Caroline Daly, who he married in 2017, and his two young children Teddy James and Elsie-Rose. The star regularly shares snaps of his beautiful abode on Instagram, with his 917,000 social media followers, and recently posted an adorable family snap during bath time, with his kids and wife smiling in the background.

Adam penned: “Nothing better than a bath with the whole family…said no one ever,” followed by a tongue out emoji.

The star’s home also features a huge flatscreen TV; much needed we’re sure so Adam can catch up on watching episodes of Emmerdale. Taking to Instagram he shared an adorable video of his son watching him on TV in the cosy lounge which also boasts big sofas and a stylish white piano, the latter of which was a £4,000 gift from Adam’s brothers Ryan and Scott.

And talking of the piano, the pair enjoy posing next to it in stylish outfits and recently did so before heading off for a date night.

Caroline looked sensational dressed in a pink power suit, while Adam opted for a plain white T and navy trousers. The home boasts various lavish accessories, including a large gilded mirror, and a grey and white colour scheme runs throughout.

And the kids’ rooms have also been very carefully considered, with little Elsie’s cot being white and princess-like with a stunning grey headboard and stars weaving around the netting.

Perhaps even more impressive is Adam’s garage roof, which has been converted to a sunbathing spot, and if that’s not enough there’s a dreamy terraced wooden patio outside which looks like both a romantic spot, and an ideal space for the kids to play. For Caroline’s 30th birthday Adam laid on an incredible surprise inside the pair’s home, with the garden padded out with pink and white balloons, a hot tub, and a the grand piano made an appearance too.

The star sweetly penned: “She cried…smashed it !! Haha happy birthday to my beautiful wife … I was there on your 18th birthday and now your 30th…u may be getting older but your more beautiful now than ever before! Hope you have the best day because, if anyone deserves it it’s you !!”

Adam appears to be a big family man, and his brothers Ryan and Scott are also in the spotlight.

His older brother Ryan is known for playing Jason Grimshaw in Coronation Street, while Scott found fame on the 2016 series of Love Island.