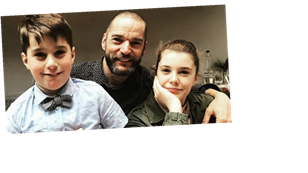 First Dates maître-d Fred Sirieix is known for his charm and words of wisdom on the Channel 4 show.

But aside from welcoming guests into the First Dates restaurant, what do we know about Fred’s family life? Let’s take a look…

Fred announced the news that he was engaged, after two years to his girlfriend, who he refers to as “Fruitcake”, last March.

Sharing a sweet photo of himself and his new fiancée, who he refers to as fruitcake on the social media site, smiling at the camera, he captioned it: "#fruitcake said yes," followed by a chocolate bar emoji, red heart emoji and a diamond ring emoji.

Fred had a 12-year romance with ex-girlfriend Alex and shares two children with her, Andrea, 17, and 11-year-old Lucien.

Fred’s daughter Andrea Spenolini-Sirieix is a British diver and was crowned BBC’s Young Sports Personality of the Year in December last year.

The 17-year-old, who grew up in London, is a member of the Crystal Palace Diving Club in south London and has competed around the globe including Kazan in Russia. Competing in the Women’s 10 Platform, Andrea won gold at the British Championships in January and February last year and the FINA Grand Prix in Rostock, Germany.

Andrea was the first female diver to win the BBC award and said Fred “cried” following the announcement.

The proud dad regularly shares diving clips of Andrea to his Instagram.

Fred’s younger brother is Pierre Lao-Sirieix who is a director at AstraZeneca – the manufacturer of the Oxford Covid-19 vaccine.

According to his LinkedIn, he is the director of precision medicine and biosamples and has worked for the pharmaceutical company for five years and four months.

He completed an MSc at the University of Nottingham and went onto complete a PhD in cancer research at the Open University.

In 2016 Fred tweeted his congratulations for Dr Pierre Lao-Sirieix who won at the UK’s leading medical awards.

He wrote: “Big up to my little brother Dr Pierre Lao-Sirieix for winning the #bmjawards #cancerreseach."