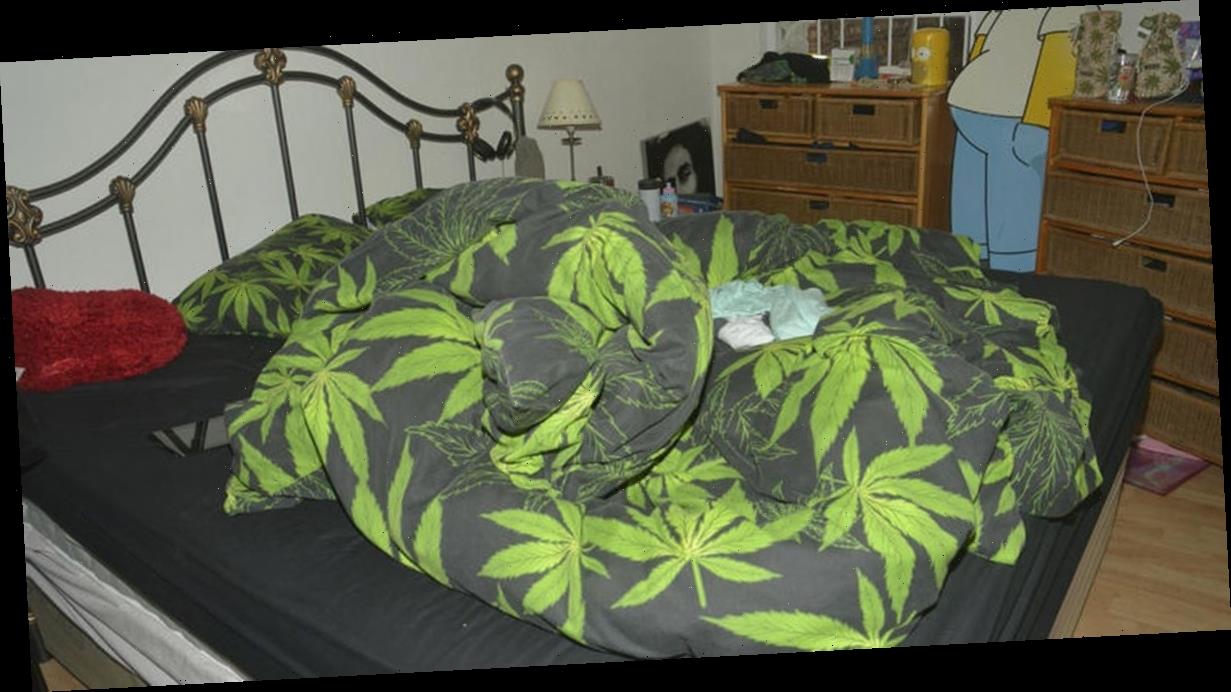 A gran arrested after police found a cannabis farm in her home claimed she was growing the drug to make medicine, a court heard.

The sophisticated setup was found in the home of Lisa Harper, aka Phillips, when officers raided her family's terraced house in Liverpool.

The 49-year-old filled kitchen jars with cannabis oils and syringes with THC – the psychoactive compound in cannabis – and plants were found in her loft.

Pictures of the inside of the home show one of the bedrooms featured a large cardboard cut-out of Homer Simpson alongside a cannabis-themed duvet cover.

Harper even used kebab skewers as syringe stoppers in a house littered with drugs and smoking paraphernalia – despite very young children clearly visiting and staying over at the home.

But she walked free from Liverpool Crown Court after admitting simple possession of the Class B drug, rather than any intent to supply, the Liverpool Echo reports.

Police received a report of a strong smell of cannabis coming from the house and went to Harper's home on December 31, 2018.

Christopher Taylor, prosecuting, said the gran invited officers inside and they immediately noted a "pungent smell of cannabis".

Upstairs in the loft they found the cannabis farm, which appeared to have been partly dismantled, and 15 new plants in pots.

Mr Taylor said: "She was starting off what the Crown would say would be a future crop.

"Also scattered around the kitchen area were various jars containing either cannabis skunk or various oils, and THC, the potent component of cannabis, in syringes.

"The defendant was cautioned and arrested during the search, but did tell officers 'it's all mine, I use it to make medicine'."

Harper gave a no comment interview, but later admitted producing cannabis, possessing cannabis and amphetamines, and abstracting electricity, through a bridged meter.

Mr Taylor said she told the author of a pre-sentence report she was addicted to cannabis but gave "no explanation in relation to the cannabis oil".

He said her son who also lived at the property was arrested, but excluded from the investigation as there was no forensic evidence against him, whereas Harper's fingerprints were found on a light in the loft.

The court heard a police expert who examined the seized items did not put any valuation on the recovered cannabis plants.

Mr Taylor said: "The officer cannot put a value on the THC in its liquid form but said it would have some sort of commercial value to it.

"In the experience of this court, it is an unusual way to see cannabis produced.

"There is the suggestions the oil is medicine.

"This is certainly the first example I've come across where there has been jars or syringes or such materials recovered."

He said mobile phones in the house did not show any evidence of drug dealing, which was why Harper was only charged with possession.

Mr Taylor, who said a small quantity of amphetamine consistent with personal use was also recovered, then showed photos of the house.

He said police found labels relating to the medical use of cannabis and its legalisation, and multiple jars and syringes containing THC.

Judge Anil Murray said: "I think she had been making that?" Mr Taylor replied: "That's the assumption."

The judge questioned why syringes were needed, but Mr Taylor said neither he nor the police expert had come across this before.

John Rowan, defending, said: "I think that's a method of storing the cannabis, it's an easier way of taking it out of a jar and then consuming it."

The lawyer confirmed his client had been using "kebab skewers" as "stoppers". Judge Murray said: "I've not come across that before."

The judge questioned whether Harper wanted a Drug Rehabilitation Requirement, stating: "The way I read the report it doesn't seem like she has any intention of stopping smoking cannabis."

Mr Rowan said: "She says that is what she wants."

Judge Murray said: "I see her nodding her head now. We will start with trying to rid her of her addiction."

He told Harper: "This is an offence you can get locked up for. If you do it again, chances are that is what will happen.

"I have read the pre-sentence report – you have not been in any significant trouble before. It seems to me you're worth the risk, as it were."

However, he warned: "You need to be careful because you've got this on your record now. If you breach this order you will get brought back to court and you could be sent to prison. Do you understand?"

He said: "That's intended to help you stop taking drugs – you need to make use of that."