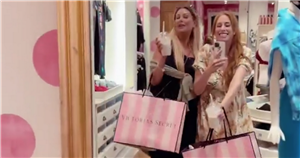 Stacey Solomon has shared a glimpse into her shopping trip with close friend Mrs Hinch.

Stacey shared a sweet video of the pair sipping iced drinks as they posed in the mirror at Victoria's Secret with their pink shopping bags, captioned: "Picked this one up and told her that we deserve a day with the chance to go to the shops that the boys never let us in."

The pregnant mum-of-three revealed how she felt '16 again' as the she pouted for the camera alongside cleaning sensation Mrs Hinch.

Elsewhere, Stacey, who is pregnant with her first little girl, could not resist taking a look at the baby clothes with Mrs Hinch who held an adorable floral baby grow.

The Loose Women panellist revealed how the pair had been 'stuck here for far too long getting emotional' as they cooed over the pretty outfits.

Ending their day, Mrs Hinch and Stacey beamed at the camera in TGI Friday's after having the day without their children and partners.

Stacey said: "Sometimes you just need to remember what it was like to be 15 again. Feels like we have had the most old school day ever.

"Kisstory all the way in the car, spraying perfumes, makeup trying and buying a new tracksuit. Now we are finishing the day in TGI's because it just made sense to finish the day with some Jack Daniels chicken.

Stacey appeared over-the-moon with her new purchases, adding: "Now I am home sweet home. I put my tracksuit straight on because I am that kind of loser.

The red-headed beauty also gave a haul of her purchases and revealed that it was '100 per cent' and 'impulse buy day' and added: "When you are so excited but regret it in the morning."

Stacey bought a £55 bottle of Gucci Bloom perfume, a MAC foundation and two lipsticks, a Lush bath bomb and lip balm and a £50 Pomegranate Noir candle among a bag of goodies from Victoria's Secret.

Stacey also treated herself to a bath with her new bath bomb and lit her new candle as she relaxed and reflected on the day.

She penned: "Sometimes it's important to remember who you are. You're mummy YES and partner and cook/cleaner/DIYer and everything in between… BUT you're also you. Just you."

Stacey tagged Mrs Hinch in the story, adding: "And it's ok to be you now and again. And remember who you are. And let that person know that they deserve to be nurtured and that they're still important. Don't forget it."