Inside the Top-Secret Work of the Official Royal Jeweler 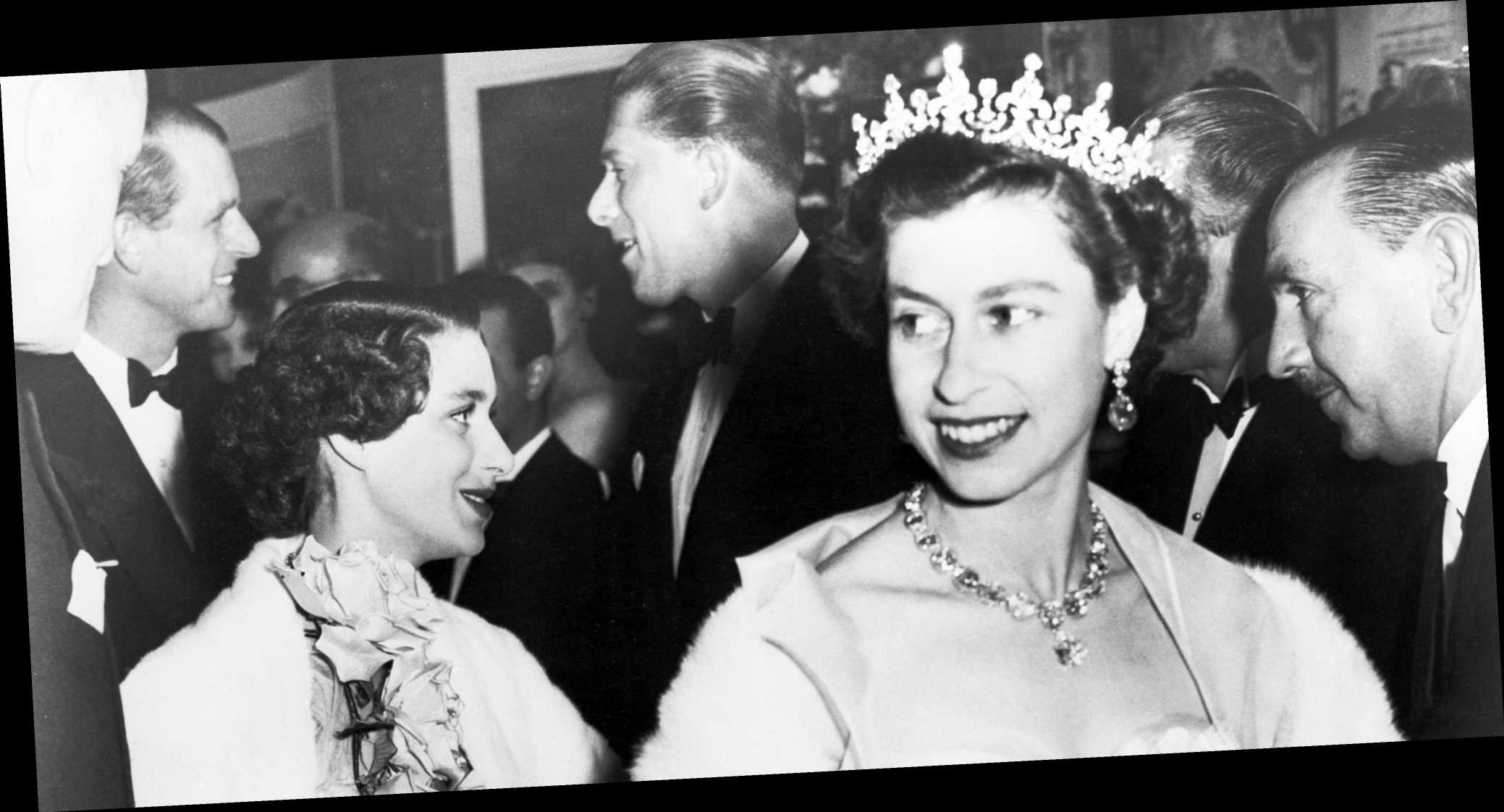 Being the royal jeweler is a lot like being a member of Fight Club, in that both are pursuits that take up the majority of your time and mental real estate, and neither are things you’re really allowed to talk about.

Of course, there are several differences between being the royal jeweler and a member of Fight Club—most notably, that the former actually exists.

“Discretion is very, very important,” says Omar Vaja, the senior sales director at Bentley & Skinner, the longtime official jeweler for the royal family. As we sit together in London to discuss the company’s work—which includes, among other things, providing pieces for members of the royal family—he drops his voice a little, as if to underscore the secrecy of it all. “We can say we are jewelers by appointment, but we will not discuss what we do exactly for the royal family. They can talk about it, but we won’t.”

The confidentiality isn’t always easy, Vaja admits, especially when a Bentley & Skinner piece is misidentified as an item by one of its competitor in the press. He and his team aren’t allowed to correct the mistake.

“I’ve been a bit upset actually when I’ve seen pieces that we’ve supplied, which the journalist [misidentifies], and I want to say, ‘Hang on a second!’ But we cannot do this,” he says. “‘No comment’ is a very important phrase to remember. Because, obviously, you want to talk about [it], because you’re proud of the work you’re doing—but you can’t.”

The Royal Seal of Approval

Bentley & Skinner holds not one, but two royal warrants—one from the queen and one from Prince Charles. These warrants are “a mark of recognition to people or companies who have regularly supplied goods or services to HM The Queen, HRH The Duke of Edinburgh or HRH The Prince of Wales or their Households,” according to the royal family’s official website. 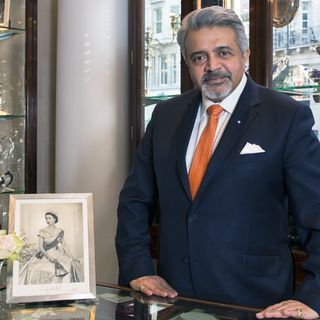 “In order to be awarded the royal warrant, what you have to do is supply to the royal household for a number of years,” Vaja says, offering the short version of the process. The long version, he explains, is much more complicated and involves approval through a committee through the Lord Chamberlain and the naming of an individual at the company to act as the official holder of warrant. Finally, after all the hoops are jumped through and cleared, a seal of approval is given by Lord Chamberlain’s office.

Vaja isn’t exaggerating. Royal warrants are granted for a maximum of five years at a time, after which point they must be renewed. To underscore just how good the people at Bentley & Skinner are at what they do, the jeweler has held a royal warrant since the later years of Queen Victoria’s reign in the 1800s (Skinner & Co. held the warrant under Queen Victoria and maintained the warrant after its merger with Bentley & Co. in 1997). 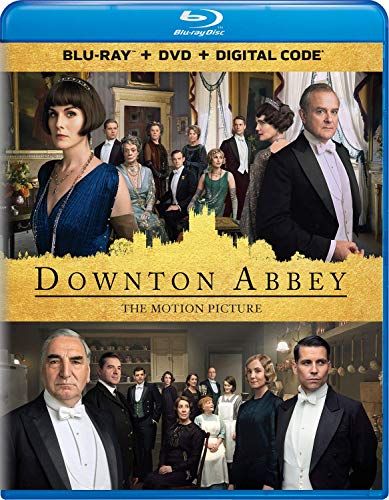 The Royal Family and the Crawley Family

In addition to providing jewelry to actual royals, Bentley & Skinner also pull pieces for Hollywood royalty—and these are clients they’re actually free to talk about. Most recently, the jeweler was tapped to provide tiaras (on loan, of course) for the Downtown Abbey movie, which was recently released on Blu-ray and DVD. 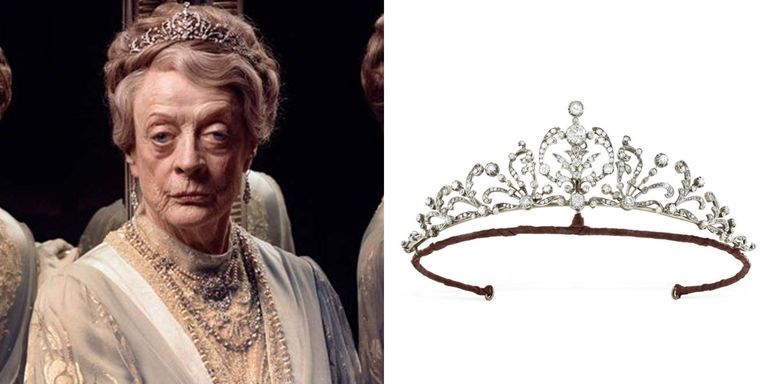 Violet Crawley’s Victorian diamond foliate piece is an authentic vintage tiara dated circa 1880. Its central diamond weighs approximately 2.25 carats and is surrounded by graduating openwork foliate and scroll design, all set with old-brilliant-cut diamonds weighing approximately a total of 16.5 carats, set in a silver to yellow gold mount with detachable gold frame, which can be converted into a necklace. 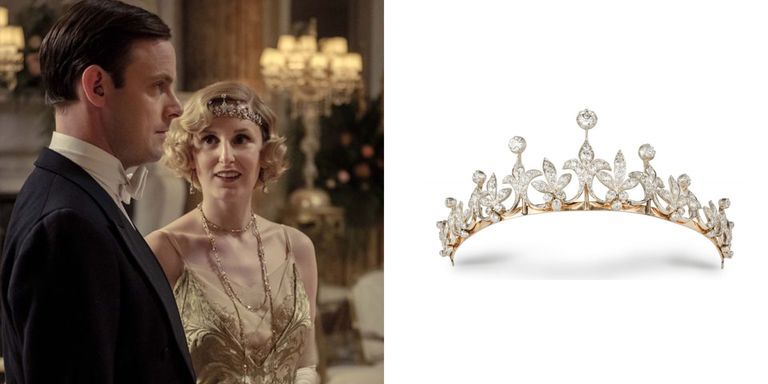 Lady Edith wore a late Victorian diamond tiara, which consists of nine diamond-set fleur-de-lys motifs with old-brilliant-cut diamond tops, estimated to weigh a total of 15 carats, set in silver to a yellow gold mount. The authentic vintage tiara is dated circa 1890. 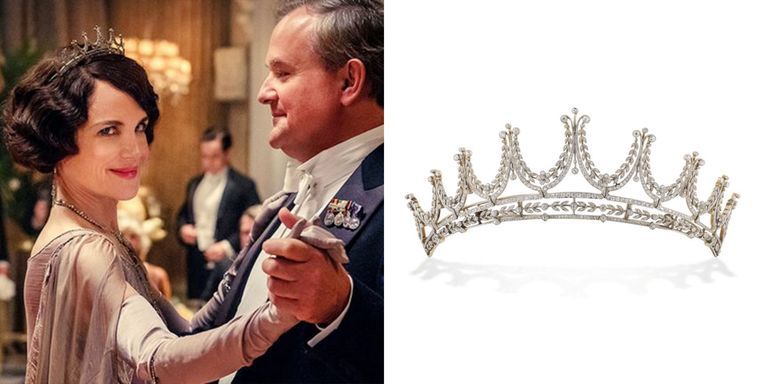 Finally, the tiara worn by Lady Cora was an Edwardian diamond tiara, with foliate swags and floral motifs graduating from the center, set with old-brilliant-cut and rose-cut diamonds. The headpiece is estimated to weigh a total of eight carats, all in a yellow gold mount with detachable frame, which is convertible into a coronet. The vintage tiara is dated circa 1900.

Vaja says that when working with film and television crews, like the team from Downton Abbey, the Bentley & Skinner jewelers step back and present options, but leave the choice to the costume designers. Since Bentley & Skinner has been providing pieces for Downton Abbey since the series was still in production, however, he says they did keep the actors’ preferences in mind when pulling options—particularly when it came to anything that would adorn the head of Smith’s Violet. 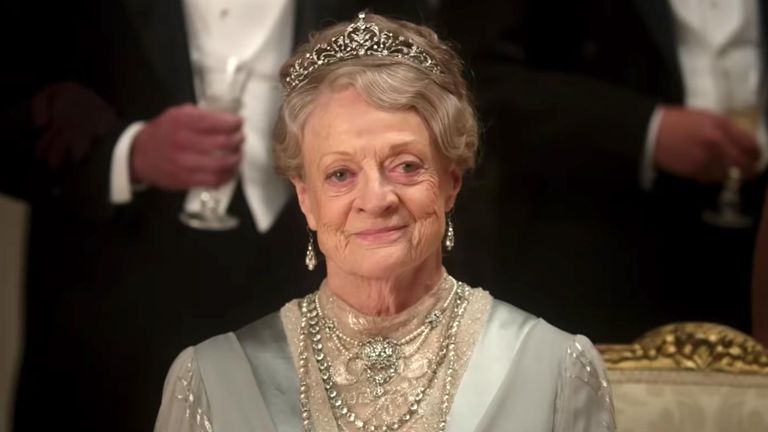 “We know from working with the series, as well, that Violet doesn’t like things that are too heavy,” he shares. “We want to try to provide her with something that was as light as possible and as elegant as possible—and she knows quality when she sees it, as well.”

Even though the tight-lipped jewelers at Bentley & Skinner (tragically) cannot dish that kind of inside gossip about the royals themselves, Vaja does share how the royal family impacts their business in other ways—like by shaping tastes and trends of shoppers around the world. 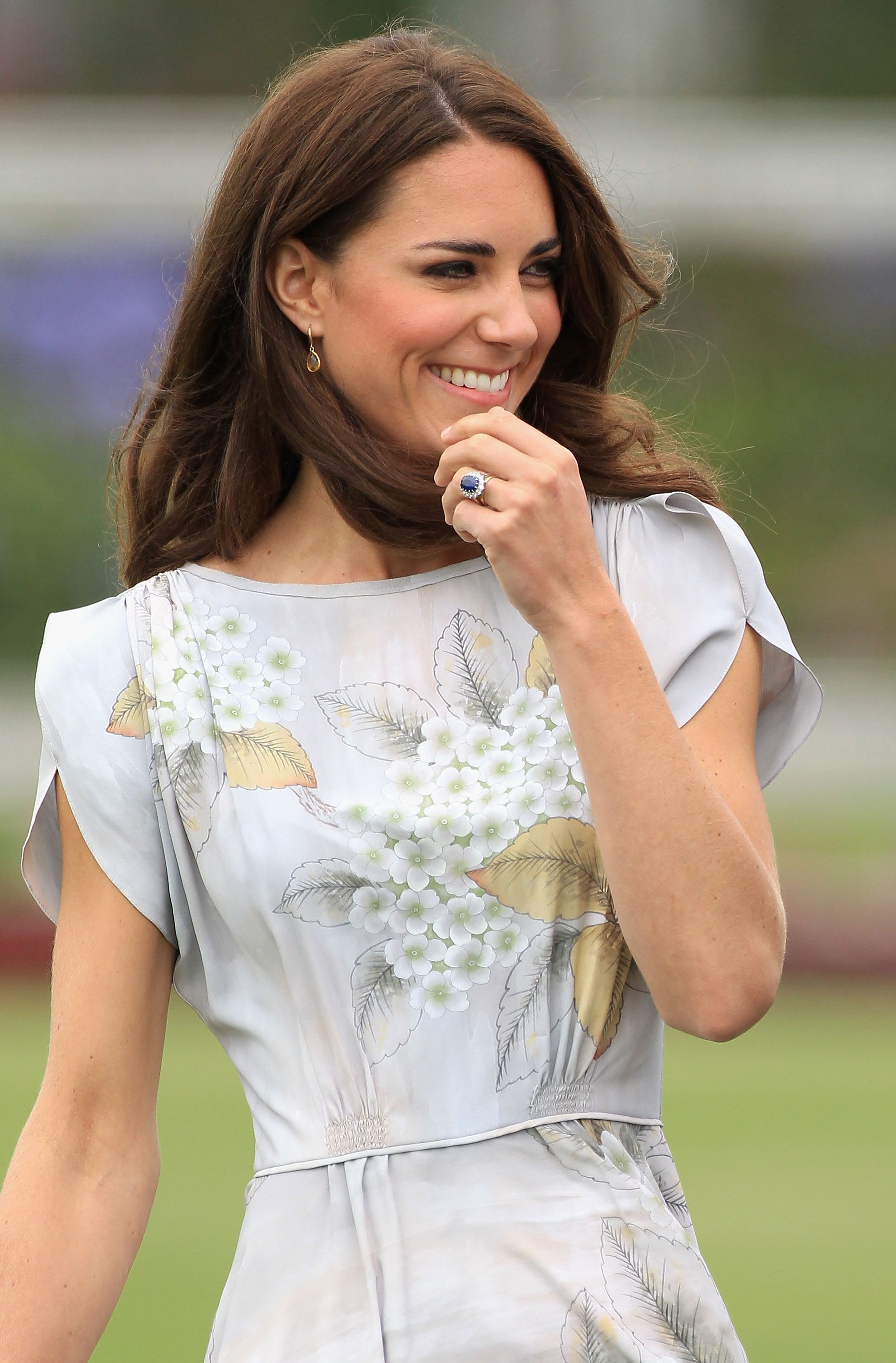 “Every time there’s a royal wedding, there is a huge interest in tiaras and engagement rings,” he says. “Still the most popular thing is what Kate Middleton’s got, which is Diana’s ring. The sapphire and diamond cluster is still the ring that a lot of brides want. It’s so highly exposed, that ring, and it has history attached it, both romantic and sad.”

Duchess Meghan and Prince Harry have also started to shape jewelry trends with the Meghan’s engagement ring. “And now with the new royals, with Harry designing something using the diamonds from his mother’s collection, a lot of brides want a diamond engagement ring,” he says. “Or they’ll ask, ‘Can we sort of have it designed like Meghan’s ring?'” 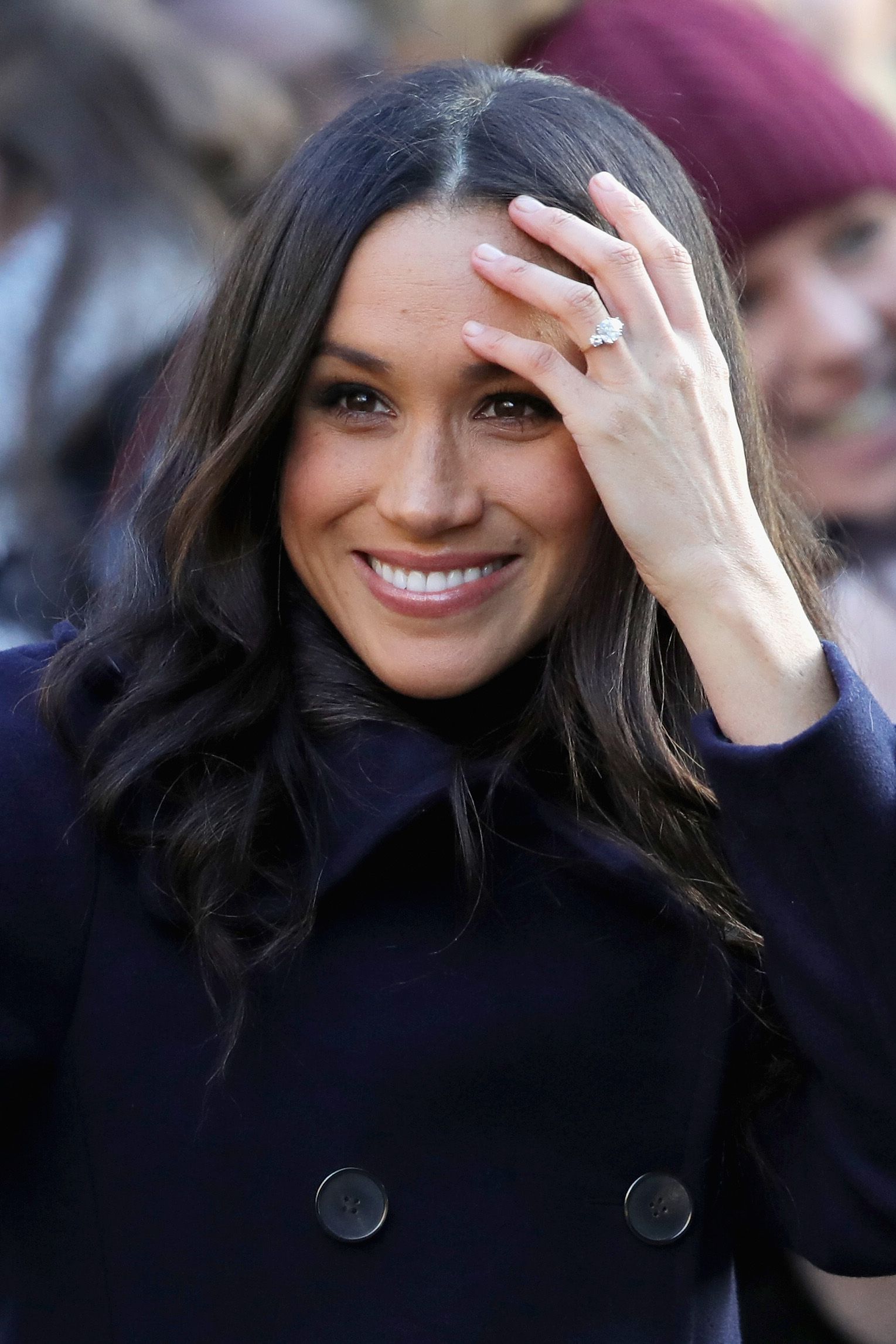 The royal-inspired trend Vaja is most excited about? Surprisingly, it’s the brooch, which is currently enjoying a comeback among younger women.

“People are more interested in the brooch,” he says. “The queen wears quite a lot of brooches. There’s a good trend now of younger people wearing brooches. And it’s great, you know, it’s so lovely seeing a blazer and a nice brooch. And this is a time when you can wear diamonds during the day, when it’s in a brooch, and that’s not considered vulgar—whereas drop earrings or a huge bracelet would be.”