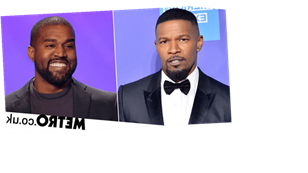 Jamie Foxx has shared his thoughts on Kanye West’s plans to join the US presidential election race and it’s safe to say he won’t be his running mate.

Kanye’s ambitious political plans have been particularly divisive with his celebrity pals like Elon Musk ‘fully supporting’ his vision, but many others such as Tiffany Haddish and Hilary Duff mocking the rapper.

And now Oscar-winning actor Jamie has revealed which side of the coin he sits on and it’s not Kanye’s.

NBA player Stephen Jackson criticised the Gold Digger rapper’s announcement in an Instagram post, writing: ‘Kanye Trump. Fool u once shame on them fool u twice u and 2x fool. #justiceforgeorgefloyd #justiceforbreonnataylor and so many more. #ivehadenough of the clown s**t.

Around the same time, the Ray actor shared his own Instagram post subliminally writing: ‘This ain’t the time for the f****n shenanigans

Kanye, 43, hasn’t won much support for his presidential hopes.

The rapper tweeted on Sunday: ‘We must now realize the promise of America by trusting God, unifying our vision and building our future.

Girls Trip actress Tiffany joked she was also running for president, while Good Morning Britain host Piers Morgan begged Kanye not to do it, describing the confident rapper as ‘deluded’ and ‘narcissistic’.

It has since emerged that Kanye has missed several deadlines to register as an independent candidate in certain states. He also needs to register with the Federal Election Commission although this can be done at any point.