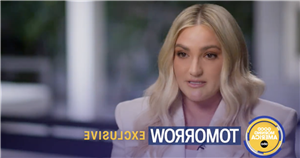 Jamie Lynn Spears has been shown crying in a teaser clip for her first interview since her rift with sister Britney Spears publicly emerged.

The preview was released on Twitter ahead of the 30-year-old’s appearance on Good Morning America on 12 January, where she is due to promote her personal memoir, as well as discuss current issues between her and her famous sibling.

In the clip, Jamie is seen teary-eyed as she proclaimed: “Um, I love my sister”, to which GMA news anchor Juju Chang asked: “But things have gotten complicated?”

“I guess so,” Jamie responded, nodding. This is the former Disney star’s first interview since Britney was released from her lengthy conservatorship, which she now wants to sue her sister and the rest of her family for after claiming they have been “living off [it] for 13 years.”

Jamie is seen in the teaser clip dressed in an off-white suit with her blonde hair worn down in loose waves, looking the spitting image of her older sister.

“What has caused this rift between you?” Ms Chang asked the younger sister of Britney later on in the clip, before following up with another question: “The book title is Things I’ve Should Have Said…what do you regret not saying?”

Viewers will have to wait to hear Jamie’s response when the interview airs on Wednesday, and fans who have been following Britney’s rift with her sister will no doubt be eager to hear what she has to say — particularly after the pop star unfollowed Jamie days ago.

The fallout between Britney and her younger sister became apparent when the 40-year-old informed her followers in July last year that she was “hurt deeply” when Jamie covered her 2011 hit song The World Ends at the Radio Disney Music Awards in 2017. Since her conservatorship battle became heavily spotlighted last year, Britney has remained vocal about how she feels towards her sister Jamie, along with the rest of her family.

She said in court before the legal order was terminated: "Not only did my family not do a godd**n thing, my dad was all for it. Anything that happened to me had to be approved by my dad.

"And my dad acted like he didn't know that I was told I had to be tested over the Christmas holidays before they sent me away, when my kids went to home to Louisiana. He was the one who approved all of it. My whole family did nothing."

Before this latest interview with GMA, Jamie addressed sister Britney’s extended conservatorship last summer, saying: “The only reason I haven't [spoken] before, is because I felt that until my sister was able to speak for herself, and say what she felt she needed to say publicly, that it wasn't my place. And it wasn't the right thing to do.

" I feel like it's extremely clear that since the day I was born I've only loved, adored, and supported my sister.

"This situation does not affect me either way, because I'm only her sister who's only concerned about her happiness."

For all the latest celebrity updates, sign up to OK!'s daily newsletter.