January Jones, 43, Wears Nothing Under Unzipped Jacket & Asks If It’s Good For A ‘Date Night’

January Jones was a gorgeous sight to see in her latest revealing photo, which included a brown jacket and black sweat pants.

January Jones, 43, got major attention on Mar. 15 when she shared an Instagram photo in which she was wearing a leather jacket with nothing underneath. The actress was holding up her phone in the mirror selfie as she showed off her skin under the unzipped brown choice and black pants. She also had her straight blonde locks parted to the side with some hanging over one side of her face.

“I’m so out of practice. Can one wear sweatpants, a leather jacket and no top as an outfit? What if I zipped it up and put shoes on.. is that sufficient?? Also does it feel more like ‘date night’ or ‘target run’?,” she wrote in the caption for the post.

Once January shared the questions in her caption, it didn’t take long for her followers to take to the comments section to answer. “Date night at Target,” one follower joked while another wrote, “It’s a pretty acceptable outfit for all occasions!” A third told her “spin class” would be the place to wear the outfit and a fourth suggested a “Combo Target run/date night? 🤔.” 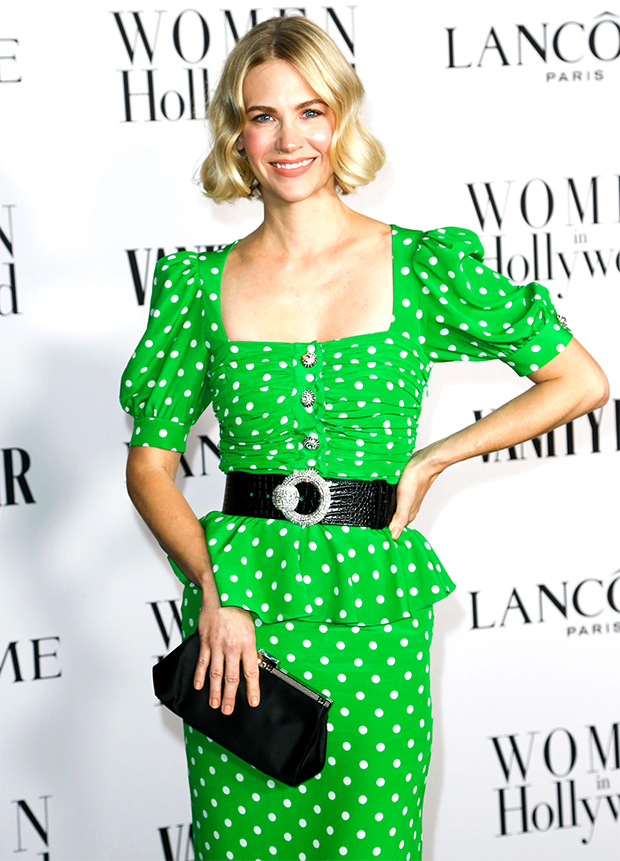 Before her latest post got attention, January wowed with a bikini pic in Oct. She was wearing a hot pink two-piece while posing and smiling for the camera as her blonde bob was down and slicked back. She had one hand up to her face and the other one on her waist with one finger appearing to flip off the camera.

January used the caption to hint that she was posting the pic to respond to a recent news outlet that claimed her “friends” thought her social media pics made her look “desperate.”

“Had to do it. #DESPERATE,” she cheekily wrote.

She also wrote a cheeky caption a few hours before when she shared a screenshot of the headline-making article. “Sh*t. They’ve discovered my secret. Consider this my public apology to my ‘friends,’” it read.