Jason Sudeikis Addresses Don Cheadle’s “Wrap It Up” Gesture During His Golden Globes Acceptance Speech; Why He Wore A Hoodie 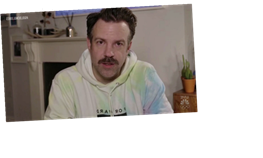 On Sunday, as Jason Sudeikis gave his Golden Globes acceptance speech for winning for his role in the Apple TV+ comedy series Ted Lasso, fellow category nominee Don Cheadle could be seen making “wrap it up” gestures on screen as Sudeikis went overtime—a move that set social media alight with folks wondering if there was bad blood between the two.

In the virtual press room later in the evening, however, a smiling Sudeikis set the record straight.

“Hey that’s just Kansas City love,” he said, referring to the city both he and Cheadle are from. “If anyone was going to tell me… He knew I’d listen to him, that’s all that is. A lot of people don’t know that he’s an excellent stage manager as well as an a American acting icon. The guy’s got chops, you know?”

“I believe when people that you care about do cool, interesting things, that you should support them, so this is no different than that,” he said. “I have a multitude of hoodies for a multitude of things that I believe in and support but this one seemed the most appropriate.”

When asked how he felt about being the first person ever to accept a Golden Globe wearing such a garment, he joked, “If you look back at Audrey Hepburn for Funny Face she also wore a hoodie… No that’s not true.”