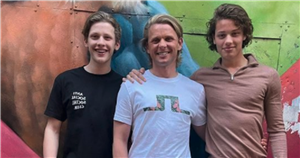 Proud dad Jeff Brazier took to Instagram on Friday 3 September to congratulate his youngest son Freddy on being offered an apprenticeship in hotel management.

The picture shows Freddy, 17, beaming away as he tucks into an indulgent looking pizza whilst sitting opposite his dad at a restaurant.

Jeff captioned the picture: “Well done to my boy @freddybraz1er who went for another part time job and did so well in his trial shift he was offered an apprenticeship in hotel management.

“Now he’s got some lovely options available to him. I’m really proud of you, Fred.

“Not so much when you’re rolling golf buggies and crashing motorbikes, but generally.”

He signed off with another “I’m proud” followed by a heart emoji.

Jeff will be glad that his young son has the opportunity to pursue a life outside of the spotlight, especially given that he has previously expressed concern over the threat online trolls might pose to his boys.

While he might have found fame on Shipwrecked, the protective father doesn’t want his sons to go down the route of reality television, remembering the struggles himself and their mother Jade Goody went through.

"While myself and their mum went into the industry by that backdoor of reality TV, it is a very difficult path," he told Metro.co.uk.

His older son Bobby, 18, is already a successful fashion model with an impressive resume under his belt.

The young model is signed to various agencies all over the world including VNY models, PMA, UNO models, Unsigned models, Bananas models and D’Management group.

He has also secured several spreads in fashion publications such as Man About Town and TINGS, magazine covers and even made his catwalk debut for Dolce & Gabbana at last year's Milan Fashion Week.

Jeff has praised Bobby's promising career as a model as well as his other pursuits, which include DJing and learning to play guitar, saying they are all "going to help give him the right to be his own person."

The TV presenter has also revealed he's spoken to his sons about the downsides of being in the spotlight after their late mum’s difficult experience.

Jade became a famous face in Britain after she appeared on Big Brother in 2002 and was subsequently deemed the "most hated woman in Britain" by several publications.

Further controversy was stirred up in 2007 when she became involved in a race row over comments she made about actress Shilpa Shetty while appearing in Celebrity Big Brother.

Jeff has described how the ordeal Jade went through makes him all the more wary of his children pursuing paths in the entertainment industry.

"I’ve been telling them for the last 10 years, to be honest," he explained. "I make no secret of the fact, it might sound ironic to people, that while both myself and their mum came through reality TV in terms of how I got into what I’m doing now, the truth is that actually [there are] a lot of difficulties on that path.

"It’s a very difficult road to navigate. I’ve always tried to encourage my children to ensure that they have their own skills and talents before entering that sort of thing…

"I think that was always inevitable, if truth be told, the press have always wanted that continuation of Jade’s story.

"Whilst that’s really lovely in terms of remembering Jade, it’s also maybe something to be wary of for the children, in that they need to be allowed to be their own people, and not necessarily always carry somebody else’s name before their own."

For all your updates on Jeff Brazier and his two sons, sign up to our daily OK! newsletter.