Jeffree Star has finally sold his bubblegum pink mansion at a $220,000 loss 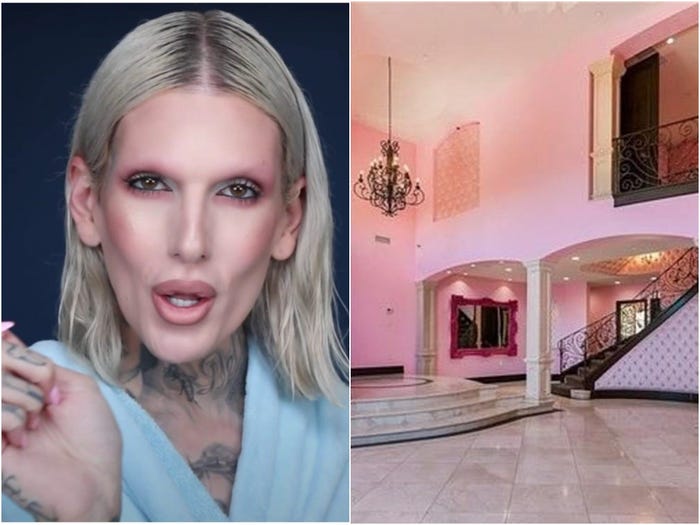 Jeffree Star's Barbie pink former home in Calabasas has been sold for $220,000 less than what he paid for it in 2016, according to Variety. The YouTube star and beauty mogul's "starter mansion" was already listed with a loss at $3,595,000, but finally sold to an orthopedic surgeon and his wife for $3.4 million after four months on the market.

The bubblegum walls, drapes, and chandeliers served as a backdrop to many of Star's YouTube videos between 2016 and December 2019, after which he moved to a $14.6 million, 25,000-square-foot mega-mansion in LA's Hidden Hills.

Star left behind a giant vault in his old home, where he kept his designed clothing collection, including hundreds of thousands of dollars — possibly millions — worth of Birkin bags. Weirdly, the vault is not present in the listing.

Star's pink house was home to him, his ex-boyfriend Nate Schwandt, and their many Pomeranians. The dogs moved to the Hidden Hills estate with Star, but Schwandt did not.

2020 hadn't been Star's year before the nearly quarter of a million loss on his property, with the emotional aftermath of his breakup, explosive allegations of sexual assault and pay-offs from several sources, and the internet turning against him and his friend-turned-business partner Shane Dawson.

A year ago, the launch of Star and Dawson's Conspiracy palette crashed the Morphe and Beauty Bay platforms because so many people were trying to buy it at once, and the YouTube superstars were doing meet-and-greets with thousands of screaming fans at Morphe stores. Now, as Insider's Kat Tenbarge reported last week, Star's empire isn't what it used to be, with his makeup now being sold at a discount at TJ Maxx, and his videos struggling to reach a million views. Even his Instagram engagement is down.

According to Variety, Star may be relieved he managed to sell the house at all, as "there aren't many buyers looking for a Mediterranean-style Calabasas mansion whose innards have been hydro dipped bubblegum pink."

But as the Daily Mail reports, it's unclear if the couple who purchased the home "really love the color pink or they have renovations in mind."