Courteney Cox took to Instagram to wish her followers a ‘Happy 4th’ with a gorgeous photo of her and her ‘Friends’ co-stars Jennifer Aniston and Lisa Kudrow standing and smiling together.

Courteney Cox, 57, proved she had an eventful July 4th celebration with her latest social media photos! The actress reunited with her Friends co-stars Jennifer Aniston, 52, and Lisa Kudrow, 57, for an epic hangout on the holiday and posed for an awesome selfie that she shared with fans. In the selfie, all three ladies are posing together in front of a picture of a beach in what appeared to be a house, and smiling.

“Happy 4th! xoxo,” Courteney captioned the pic. All three of them have their long locks down in the snapshot and Jennifer has sunglasses atop her head while Lisa is wearing a large sun hat. Courteney also attached a smiling photo with actress Laura Dern, who seemed to take part in the festivities with them as well.

Once the photo went public, it didn’t take long for fans to comment with enthusiastic words. “Just made my day,” one fan wrote while another called the ladies “beautiful.” A third shared, “Best trio” and a fourth joked they were going to “break Instagram” with such a memorable post. 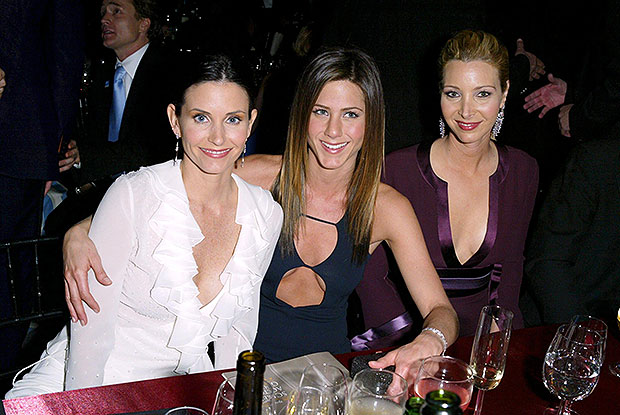 Courteney’s latest reunion with Jennifer and Lisa comes just a few weeks after she made headlines when Jennifer posted a sweet tribute to her on her 57th birthday. The doting pal posted a video of the two of them holding hands and walking together while 50 Cent‘s “In Da Club” played in the background. She also posted a recent pic of them posing with Courteney’s beloved dogs Harley and Hopper.

“Happy Birthday to this ridiculously special human @courteneycoxofficial. Time flies when you’re having fun!” Jennifer captioned one of the posts.

Courteney’s bond with Jennifer and Lisa happened during the filming of Friends, which ran for 10 seasons, from 1994 until 2004, on NBC. Since then, the entire cast has only publicly reunited less than a handful of times, including for James Burrows‘ NBC tribute special in 2016 and HBO Max’s reunion special, which aired earlier this year.