Viewers will soon get to see most of the Jersey Shore crew return for the fourth season of their popular spin-off series, Family Vacation. However, one individual will be noticeably absent from the episodes.

Fan-favorite Nicole “Snooki” Polizzi won’t be regularly featured on Jersey Shore Family Vacation Season 4, which has plenty of fans torn up over her absence from the main cast.

While many viewers are likely to tune in to see the rest of the JS crew and their family members on the series, fans are holding out some hope they may get Snooki back onto the series.

Snooki retired from Jersey Shore ahead of Season 4

This past December, it was revealed that Nicole “Snooki” Polizzi was retiring from Jersey Shore. Based on a statement she made during her It’s Happening with Snooki & Joey podcast, she said it was due to constant drama and leaving her kids to go film so much.

“I am not coming back to ‘Jersey Shore’ for a Season 4 if there is one,” she said on the podcast episode, per NY Daily News. “And there’s a lot of reasons why, but the main reason is … I just can’t do it anymore. Literally leaving my kids to film it is really, really hard on me and Joey knows I try and quit every single day.”

Polizzi didn’t rule out a return to reality television but mentioned she wouldn’t return to Jersey Shore due to the in-fighting, which even brought death threats her way and towards her kids.

“I’m not saying goodbye to reality TV and me working as a reality star,” she said. “I just need to remove myself from the show because I don’t like the direction that it’s going in when it comes to the drama and just the cattiness. I just can’t do it.”

During an appearance on The Mel Robbins Show, Snooki was asked how difficult it was for her to quit Jersey Shore after it became her career. She reiterated why she made the decision.

“It was really hard, but I had to think about my happiness and where I really wanted myself to be,” Polizzi explained.

“It’s being a mom and being kids, not drinking and drama,” she added with regards to her decision to “retire.”

Her decision to retire came after appearing on all six seasons of the original Jersey Shore (2009-2012), four seasons of the Snooki & JWoww spin-off (2012-2015), and all three seasons of Family Vacation. She may pop up as a guest on episodes but won’t be a regular for the new season. She’s also appeared on other shows, including competing on Dancing With the Stars.

She married Jionni LaValle in 2012, and the couple now has three children together that Snooki wants to be present for.

As she mentioned, part of her decision also involved drama, which at one point involved her and JS castmate Angelina Pivarnick at odds. It created fan feuds, and now it looks like some of Snooki’s fans want her back on the series and Angelina out.

Fans still begging Snooki to return to the show

With the season premiere of Jersey Shore Family Vacation just weeks away, some fans let Snooki and MTV know via social media that they want her back on the series. They’re also suggesting to fire a certain someone or include Snooki instead.

With a promotional image for the new season recently making the rounds online, several fans re-posted or retweeted it with comments to the effect of wanting Snooki on the show rather than Angelina.

“Wait it minute I thought Angelina didn’t want it to be on the show anymore, What Happened?? I want @snooki back!” one person tweeted along with several hashtags. They also tagged MTV, so the network can realize what’s up. 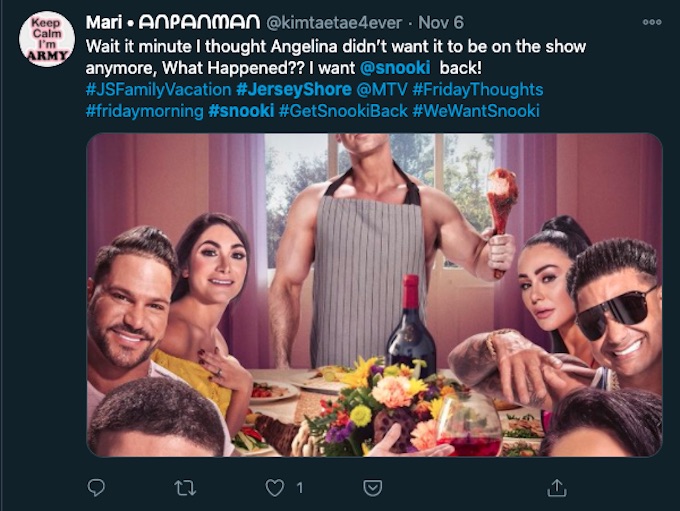 Another person retweeted Mike “The Situation” Sorrentino after he posted the same promotional image above with the comment, “It’s happening!! #JSFamilyVacation.”

The individual who retweeted had some strong words regarding Angelina too. “Angelina can very much kick rocks, SNOOKI COME BACK! #jerseyshore,” the person said with their retweet (below). 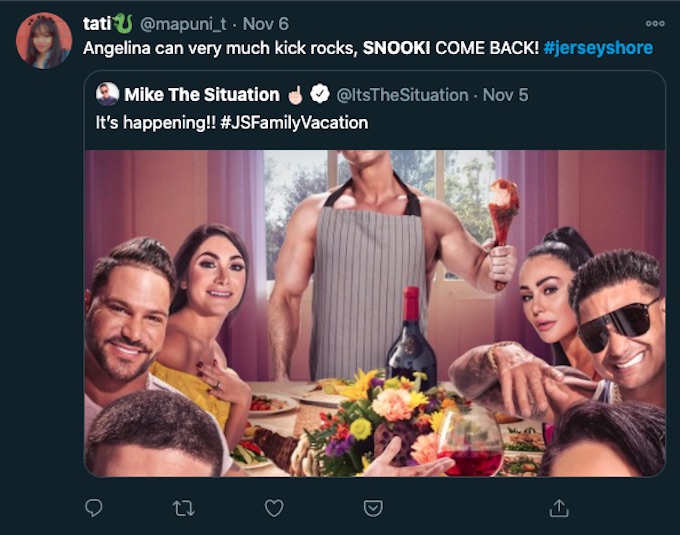 Another fan tried to play up the guilt factor with a comment many Jersey Shore fans might agree with, except those that are anti-Snooki.

“Snooki where you at?…come back..its not the Jersey Shore without you,” the fan wrote, replying to a recent tweet from Polizzi.

“Come back to Jersey shore,” another fan replied to Snooki on one of her recent tweets. Others echoed those sentiments on different posts, saying it just won’t be the same.

Viewers will still see familiar faces Pauly D, The Situation, Ronnie, JWoww, Vinny, Deena, and yes, Angelina. Many will be holding out some hope for Snooki moments via guest appearances, but otherwise will be missing her appearance on the show.