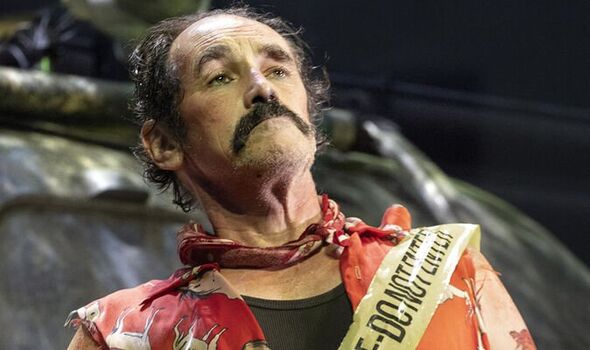 In a clearing in the woods there lives a man with dark eyes and ancient blood in his veins. He boasts he was born wearing a black cloak with a bullet between his teeth. He speaks of meeting the giants who built Stonehenge, of the golden drum they gave him to call them in time of need. He traces his ancestors back to a lost England of gods and glorious purpose. He is a gypsy in a battered metal trailer. A drunk who sells drugs to local teens who both idolise and mock him. He is a braggart and reviled outcast. But is he a liar or does he see more truly than anyone?

Jez Butterworth’s staggering play presents Little England as a small corner of Wiltshire, diminished in spirit and society yet with echoes still of primeval glories under endless skies, of half-remembered ley lines under our feet. Rooster Byron (an extraordinary Mark Rylance) horrifies the residents of the new nearby housing estate with loud drug and alcohol-fuelled parties at his rubbish-strewn campsite. Yet the local youths come to him for sanctuary and the adults for something to numb the unending smallness of their lives.

His reign of misrule is ending, though. The petty town bureaucrats and local police are about to evict him as an illegal squatter and antisocial menace, dig up his land and burn down his home. The time is coming for Rooster to face a reckoning, to find out who stands by his side and if the magic that sings in his blood can stand against the censure and closed minds that besiege him.

Rooster (and so also the astonishingly believable Rylance) is a force of nature, unable and unwilling to conform and reduce himself, constantly spinning preposterous tales, avoiding responsibility for his young son and seemingly in denial about the realities and laws of the modern world.

Butterworth’s beautiful prose surges between florid and fanciful flourishes, endlessly amusing references to local TV stations and celebrities, and the crudest profanity. The language echoes the dichotomy between the basest elements of humanity and our almost mythical heritage as its rhythms and textures musically build towards the shattering climax.

Throughout, Rylance swaggers and roars, does a handstand in a water trough, capers and cavorts, but also lets slip glimpses of bleak knowledge, and deep compassion for the flawed creatures around him.

It is a staggering and immersive performance that exhilarates to watch and elevates both those on stage and the spellbound audience.

The stage design by the man known only as ULTZ is equally magnificent. Full-size real trees, bushes and grass wrap around Rooster’s little world, extending into the wings and up into the rafters. Chickens peck in metal cages and a goldfish swims in a polythene bag.

The strong supporting cast feel similarly, vividly alive. They are led by Mackenzie Crook as Rooster’s closest friend Ginger, a gauntly timid creature who treats the outcast with equal affection and scathing scepticism. Eleanor Worthington-Cox as local fairy costumed teenage runaway Phaedre opens the show with a piercingly beautiful a cappella of the first verses to William Blake and Hubert Parry’s Jerusalem.

It sets the tone for an overwhelming evening that potently draws on England’s pleasant pastures and ancient times while presenting the mean smallness of our world, lamenting how far we have fallen, how much of our past we have forgotten.

All that we have left is Rooster, battered and bloody, raining curses down on his enemies and pounding his golden drum.  He calls hoarsely, desperately on ancient forces. The trees shake and the ground trembles. We dare to dream that the giants are coming, they are coming to save us at last.

JERUSALEM AT THE APOLLO THEATRE TO AUGUST 7