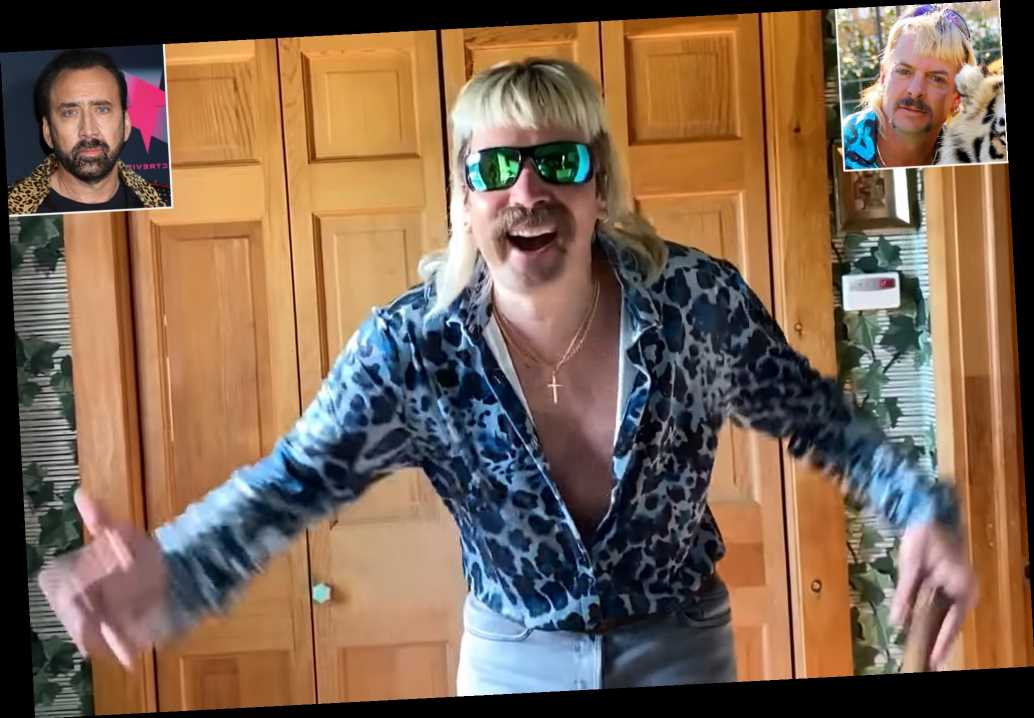 Jimmy Fallon is pulling off a multi-layered impersonation!

During Tuesday's episode of The Tonight Show, the host, 45, demonstrated how he thinks Nicolas Cage's upcoming performance as Tiger King's Joe Exotic could play out. It was announced on Monday that the Face/Off actor, 52, would portray the disgraced zookeeper in his first-ever TV role.

"Everyone on the internet is all freaking out about it and all excited about it, and we are so excited about it too, only because we got sneak footage — a sneak peek at Tiger King starring Nicolas Cage," Fallon joked on his show, leading into his spoof sketch.

In the clip, Fallon dons a mullet and sunglasses while mimicking Joe Exotic's wardrobe, filming throughout his home, where he's self-isolating with his wife, Nancy Juvonen, and their two daughters, Winnie, 6, and Franny, 5.

Fallon channels Cage's unique delivery and mannerisms while spouting Tiger King jokes. The Saturday Night Live alum even busts out a guitar at the end, impersonating one of Joe Exotic's backlog of country music songs. Never miss a story — sign up for PEOPLE's free daily newsletter to stay up-to-date on the best of what PEOPLE has to offer, from juicy celebrity news to compelling human interest stories

Cage's forthcoming Joe Exotic adaptation (not to be confused with the Hulu limited series coming soon with Kate McKinnon starring as Carole Baskin) will be produced by Imagine Television Studios and CBS Television Studios.

The story will be based on the Texas Monthly article “Joe Exotic: A Dark Journey Into the World of a Man Gone Wild,” by Leif Reigstad.

The role marks the first television series role of Cage's career. The Oscar winner previously told PEOPLE that he is "always looking to learn something" in the roles he takes on.

"That’s why if you look at my filmography, it’s so eclectic," he said at the time. "I’m always trying to challenge myself and take those risks and go for the triple axel, even though I might fall on my face. It’s still exciting to go for it and you still get points for trying."