Jo Joyner will return as Mandy Carter in Ackley Bridge on Monday, however season 4 will be her final one in the show. The ex EastEnders actress has now revealed why she decided to quit the Channel 4 drama.

The 43-year-old candidly stated “it didn’t need me any more”, as she spoke out about bidding the school-set show goodbye.

The mother-of-two said that while Ackley Bridge is close to her heart, the distance from home proved an issue.

She said her own situation mirrored Mandy’s “a little bit” – the headteacher at the multicultural comprehensive.

Speaking in a new interview, Jo recalled how she told bosses how she was feeling at the end of 2020. 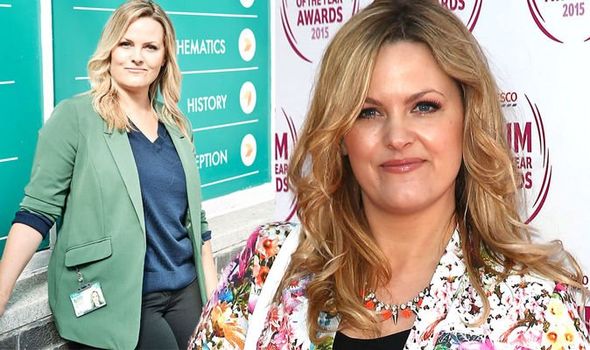 When asked why she’s heading off, she commented: “I’m really proud to have been part of Ackley Bridge. I think it came at a really good time.”

The small screen favourite continued: “There had been a lot of terrorist activity here and abroad, and it was a good time to have a programme that celebrated people’s difference and understood their similarities.

Jo went on to mention her living arrangement with husband Neil Madden and their twins: Edie and Freddie, 11.

She went on: “But it’s a long way from home for me and it was a lot of time, three or four years, of being away from Monday to Friday for months on end.

“A little bit like Mandy, I felt the whole thing was up and running, the kids were owning it and it didn’t need me any more.”

Jo added to this week’s OK! Magazine: “So at the end of last year’s series I let them know I was probably ready to move on.

“I love Mandy and I wanted to give her an exit, but it was up to them whether they hit me with a bus!”

Ackley Bridge series 4 will start next week, airing every weeknight for a fortnight.

It first launched in June 2017, with the latest one going out to fans two years later.

While the fourth run was originally set to air in September, filming was postponed due to the COVID-19 pandemic.

Jo has been a part of the cast since the beginning, alongside the likes of Robert James Collier, Sunetra Sarker and Charlie Hardwick.

Mandy has had her fair share of drama over that time, and left to take maternity leave at the end of season 3.

But she returned early after discovering that her temporary replacement, Sian Oakes (played by Ty Glaser), was grooming student Cory Wilson (Sam Retford).

Read the full interview in this week’s OK! Magazine.