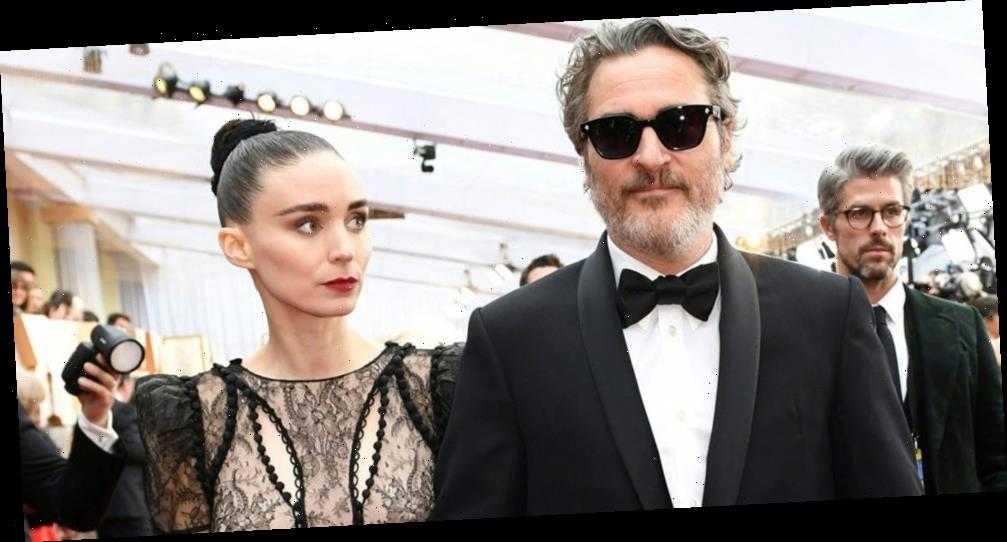 Joaquin Phoenix may be nominated for best actor at the 92nd annual Academy Awards, but it appeared as though his attention was focused on Rooney Mara.

The "Joker" actor lagged behind his fiancée on the red carpet at the Dolby Theatre in Hollywood, California on Sunday — just so that he could admire her.

Photographers captured the moment that the couple arrived to the red carpet hand-in-hand. Mara donned a black lace Alexander McQueen gown with cutouts. She wore a red lip, and her hair was slicked back into a tight bun.

As Mara and Phoenix walked the red carpet, they stayed very close to each other.

However, the 45-year-old actor removed himself from the scene when the photographers began snapping pictures. Mara posed for the cameras alone, while he smiled and watched her from afar.

He kept his hands in his pockets, and his gaze was fixated on the "Girl With the Dragon Tattoo" actress as she continued to display her gown.

The couple reunited for the remainder of the red carpet, and Phoenix and Mara openly embraced before entering the Dolby Theatre.

This wasn't the first time that Phoenix used an awards show as an opportunity to admire his fiancée. He also took the backseat at the 2020 Golden Globes, where he was photographed visibly gushing over Mara in a black Givenchy gown on the red carpet.

When Phoenix won best actor in a motion picture drama later that evening, he choked up while thanking Mara during his acceptance speech. He said, "I love you" and wiped away tears.

He also acknowledged his fiancée after winning the tribute actor award at the Toronto International Film Festival.

"One last thing — somewhere here, I don't know where, is a filthy dragon, and I want to rip its wings off and fasten a blanket and sleep with it forever. I love you. Thank you," the "Walk the Line" actor said.

The pair, who met on the set of "Her" in 2012, are often private about their relationship. They didn't begin officially dating until 2016, when they costarred in "Mary Magdalene." They confirmed their engagement in July after three years of dating.