There are doubts over the strength of the jobs market recovery out of the coronavirus recession but it has not been enough to put off the nation's shoppers who are maintaining their new-found love for online purchasing.

Payroll data from the Australian Bureau of Statistics showed through the month to October 17, the number of jobs dropped by 1.7 per cent. 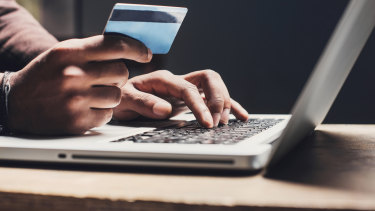 The surprise result was not just confined to Victoria, which was nearing the end of its lockdown, with every state and territory reporting a fall a drop-off. Outside of Victoria, payroll jobs were down by 1.8 per cent between mid-September and mid-October.

The fall in jobs also hit total wages, which slipped by more than 2 per cent through the same period.

Since the start of the pandemic, total payroll jobs are 4.4 per cent down. Victoria's are down the most of any state or territory, by 8 per cent, while the best performed area is the Northern Territory where they are down by just 1.3 per cent.

The drop in jobs coincides with the reduction in the federal government's JobKeeper wage subsidy but economists said it appeared the fall was more likely due to broader issues at play in the economy.

The Reserve Bank this week cut the official cash rate to 0.1 per cent and announced a $100 billion bond-buying program, aimed in part at reducing unemployment, which it expects to peak at just under 8 per cent by year's end.

Separate data from the bureau revealed the depth of the impact of the April and May lockdowns on the national jobs market.

One million jobs disappeared through the June quarter, with the number of secondary jobs down by 193,400 or almost 20 per cent.

While employment prospects were tougher through September and October, consumers were unafraid to spend.

The bureau reported that while retail sales dipped by 1.1 per cent in September, through the quarter the total volume of goods and services bought by the nation's army of shoppers jumped by a record 6.5 per cent.

It more than offset the 3.5 per cent fall that occurred in the June quarter and will add to overall GDP growth through the September period.

The total purchases of clothing and footwear alone soared by more than a third through the quarter while food sales, which normally track closely to population growth, lifted by 3.2 per cent as Australians continued to cook plenty of meals at home.

Shoppers outside of Victoria are returning to cafes and restaurants in droves. In NSW, spending in this sector is now up by 93 per cent on the lows recorded in April although they are still 11 per cent short of where they were before the advent of the pandemic.

Online sales now accounted for more than $1 in every $10 spent, up from 60 cents before the recession.

ANZ economists Adelaide Timbrell and Felicity Emmett said while retail sales had soared, overall household consumption was unlikely to be quite as strong because people were still spending less on services such as entertainment and travel.

"We expect to see retail's share of household spending to be elevated through the December quarter as the reopening of Melbourne is likely to have a considerable positive effect. The recent rate cut is less likely to impact sales much," they said.

Get our Morning & Evening Edition newsletters

The most important news, analysis and insights delivered to your inbox at the start and end of each day. Sign up to The Sydney Morning Herald’s newsletter here and The Age’s newsletter here.