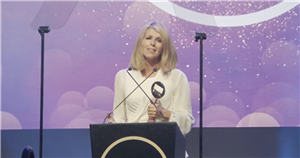 Kate Garraway was left floored at the Television and Radio Industries Club (TRIC) Awards on Wednesday by an emotional message left for her by her children.

Kate scooped the coveted TRIC Special Award at the ceremony for her services to broadcast journalism throughout the pandemic, all while supporting her husband Derek Draper.

Derek was hospitalised with Covid-19 symptoms for most of last year, with Kate helping to look after him and their two children, Billy and Darcey.

He has now returned home, but not yet made a full recovery, as Kate admitted he can "understand" her but "can't respond" to what she says.

Picking up the award, Kate admitted she was "completely swept away" by the honour, going on to thank the team at Good Morning Britain – which also picked up an award at the ceremony. "I'm lost for words. I am slightly bewildered," a clearly dazed Kate said as she stepped up to the podium.

A video of Kate's highlights was shown on the projector screen, including clips from her I'm a Celebrity… Get Me Out of Here! stint, with hubby Derek appearing at the end to support her as she left the jungle.

Speaking of the poignant video montage, Kate giggled to her GMB boss Emma: "Am I actually fired because that was the most amazing montage. It feels like you just wrapped up the last 21 years!" But the most emotional point of the night arrived when Kate's kids sent in a sweet video to thank their mum for her hard work over the last two years.

Darcey, 15, and Billy, 12, appeared on screen and looked to be outside the family home as they told their mum how proud they both are of her.

Billy said: "Thank you so much for looking after dad and trying to make him get better", as Darcey also offered her thanks. In her acceptance speech, GMB star Kate said: "It's been tough for everybody and so many people have said today how amazing it is that television stayed on air, radio kept going and all the production teams and all those people involved and it's so true.

"But, it's not just those, it's all the rest of you in the room.

"It's the people that make the TVs, lay the cables, the people that sponsor the events – all of you keep going we're all in this amazing industry which I've always considered to be a huge honour to be part of to be able tell people's stories, help them to tell theirs, hold people to account and just generally be part of something extraordinary."