In the shot, the “Smile” singer is rocking a Medela breast pump bra and Frida Mom postpartum underwear.

“Hair n makeup by: @exhaustion,” she quipped on the post. 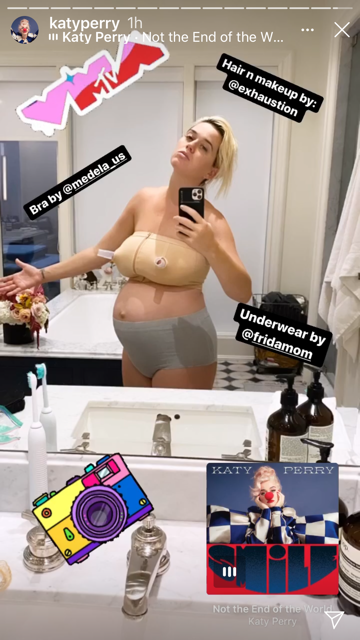 Perry did not attend this year’s VMAs as she is recovering from giving birth. She hosted the award show in 2017.

While Perry was embracing her post-baby body, she was also nostalgic for her pre-baby figure. Earlier in the day, she shared her video for the song, “Champagne Problems,” writing on Instagram, “🎶Allllll weee goooot arre  #ChampagneProblems  nowwe 🎶 🍾🥂 Listen to Champagne Problems to get your pre-baby body back 😩 link in bio #Smile is OUT NOW!”

The video features a pre-baby Perry in a sparkly sequin gown with a thigh-high slit and rhinestones hanging down from her face.

Though she just welcomed her first child, Perry is still hard at work promoting her new album, Smile. In addition to the “Champagne Problems” video, she also released the comic book-themed video for her song, “Tucked,” over the weekend.

For more from Perry, watch the clip below: