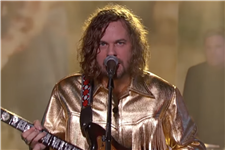 Kevin Morby offered audiences a taste of his latest album with a high-octane performance of “This Is a Photograph” on Wednesday’s episode of Jimmy Kimmel Live!.

Backed by a full band and a trio of backup singers, Morby emphasizes the track’s slow-burning dynamics, skillfully layering different sonic elements — a jaunty guitar riff, the gentle shake of a maraca, an unobtrusive bass line — until the performance explodes into a frenetic, urgent crescendo. “This is what I’ll miss after I die,” he exclaims during a chant-like refrain. “And this is what I’ll miss about being alive.”

“This Is a Photograph” served as the lead single from Morby’s eponymous record — which Rolling Stone called “an album of emotional ephemera set to song, culled from lives lived and lives imagined” — released last month. The song was followed by the punk-tinged “Rock Bottom” and the emotionally vulnerable “A Random Act of Kindness.”

While on Kimmel, the singer-songwriter also recorded a web-exclusive performance of “Beautiful Strangers,” his 2016 standalone single benefitting the nonprofit Everytown for Gun Safety, which advocates for gun control.

Morby is currently on an expansive world tour in support of This Is a Photograph, which takes the Kansas native throughout Europe and the U.K. before embarking on a North American leg in the fall. That tour kicks off Sept. 28 in Sonoma, California before wrapping Nov. 12 in Vancouver.