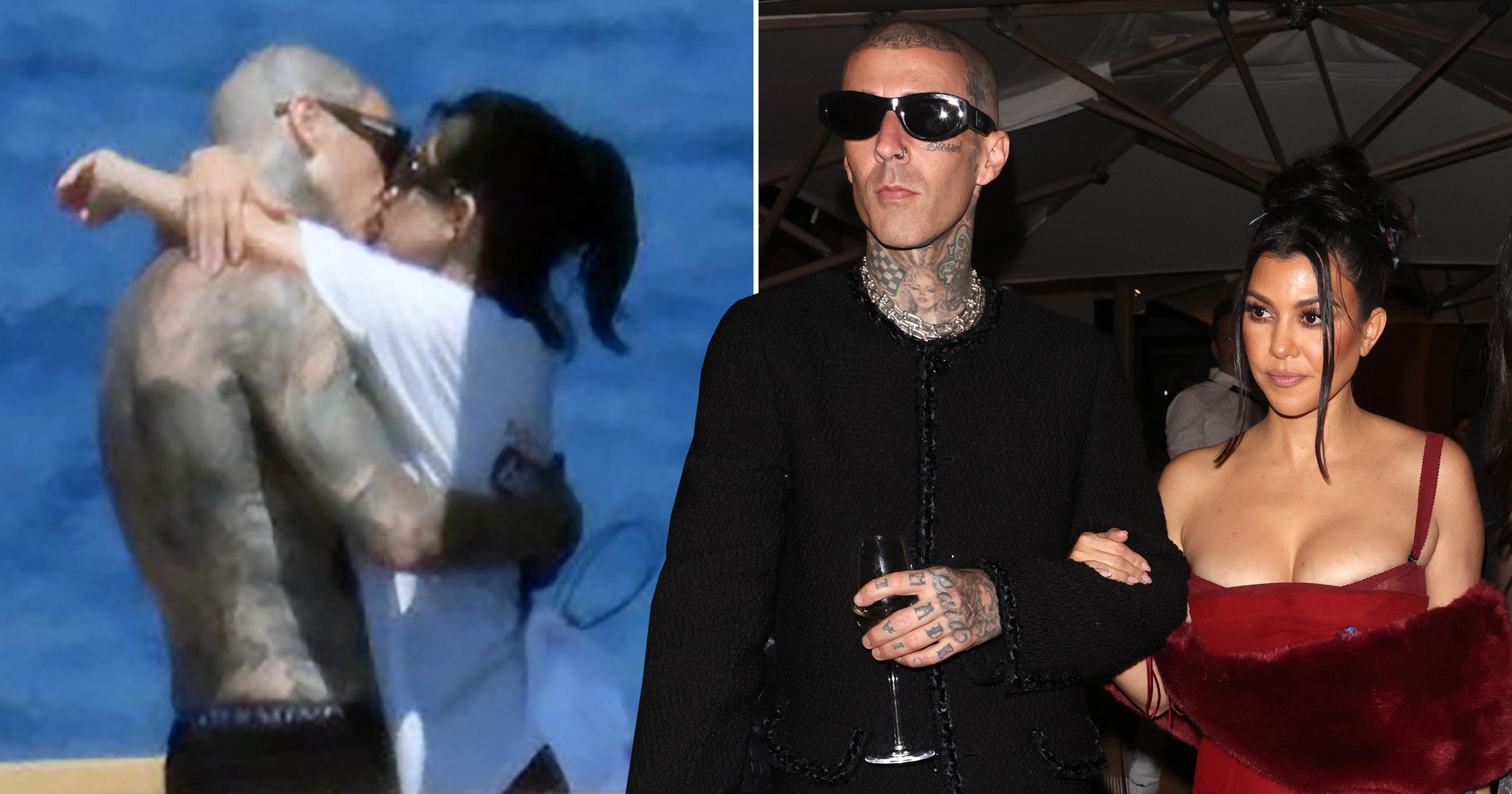 Kourtney Kardashian and husband Travis Barker have shown they’re clearly smitten with each other while being papped kissing on a boat trip ahead of an ‘intimate ceremony’ in Italy this weekend.

But the pair have jetted off to Portofino in Italy this week so they can solidify their nuptials in front of close friends and family, with the backdrop of the gorgeous Mediterranean.

In new photos, the pair showed just how loved up they are as they were snapped enjoying some downtime before the ceremony took place this week.

Ahead of their big day, they made the most of the sunshine and glamorous surroundings on a family boat ride in Portofino.

The newly released snap shows them beaming as they shared a kiss on the trip, and weren’t shy to pack on the PDA.

The bride proved she’s Travis’ number one fan, donning a T-shirt adorned with an image of his band, Blink 182.

Travis looked the epitome of chill before his big day, wearing black swim shorts and sunglasses as he enjoyed the Italian heat.

He went topless for the journey, showcasing his huge collection of tattoos as he embraced his partner.

The lovebirds were joined by Kourtney’s three children, Mason, Penelope and Reign, for the outing, as shown in other snaps from the day – which comes just before they are due to walk down the aisle again.

Elsewhere, the pair enjoyed an evening out in Portofino, as they glammed up for dinner ahead of the lavish ceremony.

They sipped on champagne with pals, with Kourtney looking stunning in a red skintight ensemble, complete with a burgundy fur across her shoulders.

Meanwhile, Travis was dressed in all black, as they walked arm in arm to enjoy the company of their loved ones before they walked down the aisle.

According to TMZ, Kourtney and Travis have rented the historic house museum Castello Brown located on a hill above Portofino harbour to celebrate their romance with all their loved ones.

Their celebrations are thought to be spanning four days, TMZ reports, with Khloe and Kim Kardashian, and Kendall and Kylie Jenner making their way to Italy – along with momager Kris Jenner and her boyfriend, Corey Gamble.

Scott Disick reportedly didn’t make the cut, but Travis’ kids and Blink bandmates are thought to have nabbed an invite.

As well as the wedding, which will be their third ceremony, it has been claimed that Kourtney and Travis – dubbed Kravis – are throwing a huge reception party in LA.

Kourtney and Travis announced their engagement last October and got legally married in Santa Barbara over the weekend, sharing sweet snaps from their romantic – and typically PDA-filled – big day.

Alongside a string of black-and-white photos from the surprise nuptials, the mom-of-three posted on Instagram: ‘Till death do us part.’

She previously shared snaps from their trip to Las Vegas, before confirming that it wasn’t legally binding as they couldn’t get their hands on a license.

‘Found these in my camera roll,’ Kourtney captioned photos from their ‘practice’ big day.

‘Once upon a time in a land far, far away (Las Vegas) at 2am, after an epic night and a little tequila, a queen and her handsome king ventured out to the only open chapel with an Elvis and got married (with no license).’