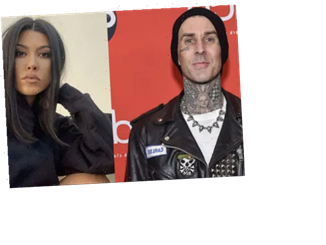 From the very beginning of their relationship, Kourtney Kardashian and Travis Barker seemed like a bit of an odd couple.

Yes, they’ve known each other for years, and they’re both single parents, but the fact is, these two come from very different worlds.

Southern California is a big region, and culturally speaking, Travis and Kourtney hail from opposite ends of it.

Kourtney is from swanky Calabasas, and as a kid, she hob-nobbed with the children of celebrities at her tony private school.

Travis is from Fontana, California, where he and his friends spent their days skateboarding, playing in garage bands, and pursuing other inexpensive ways of killing time.

But mutual attraction drew these two together, and they’ve been an item for several months now.

As their relationship matures, however, fans are left wondering what exactly they have in common.

Is it just physical attraction, and if so, is that enough to sustain a lasting relationship?

It’s still a little early for Kourtney and Travis to concern themselves with such questions.

But fans of the couple are already deeply concerned, for some reason.

In fact, tabloid media outlets are currently running headlines that say things like “Love Or Lust? Why Kourtney & Travis’s Relationship May Be Short-Lived”.

The main thrust of these pieces is that Kourtney and Travis’ relationship is based on nothing but sex and is therefore destined to fall apart.

It’s tough to say for sure where fans got this idea, but it seems to be rooted in a recent Entertainment Tonight article in which an insider claimed that Kourtney and Travis are in a state of insatiable mutual lust.

“Kourtney and Travis are in total lust over each other and she doesn’t regret going public with their relationship at all,” the source told ET.

“The relationship was a long time coming because the attraction has always been there on both sides,” the insider added.

In most of the secondary articles which quote this article as proof that Kourtney and Travis are in the throes of a pasionate fling, the excerpt stops there.

But the rest of the quote tells a different story:

“They love the fact that they have a true friendship and bonded that way before taking anything further and making things romantic,” it continues.

Add to that the fact that Travis gushed about Kourtney in a recent interview, and you’re left with a very different view of the relationship.

So there you have it.

It sounds to us like Kourtney and Travis have a lot more going on then just physical attraction.

Are they built to last for the long haul?

But one thing we now for sure is that they seem to be having fun together, and really, what more can you ask of such a new relationship?