Kim Kardashian and Aidy Bryant initially swapped lives thanks to a magic clock in a ‘Freaky Friday’ inspired sketch that also included Kris Jenner and Khloe!

Kim Kardashian, 40, didn’t disappoint with her Saturday Night Live debut — and even had some family members on hand for some help! It started when Kim was having a heart-to-heart about her busy life with SNL cast member Aidy Bryant. Kim confessed that she felt she was “so busy” all the time, as Aidy appeared enamored with the reality stars’ life.

“I do have this magic clock,” Kim revealed, suggesting the two could switch lives for a day. “Wait, you want to switch places using dark magic for 24 hours without anyone knowing?” a confused Aidy inquired. After a brief spell, Kim was Aidy and Aidy was, well, Kim. The comedian was seemingly loving her glam new life as paparazzi followed her around and she filmed herself wearing SKIMS. “Are you ready to take the bar exam?” one photographer asked Aidy’s Kim, who confusingly replied, “Wait, what?” (Kim has been studying to become a lawyer in California).

During one photoshoot, Aidy’s Kim even busted out Kim’s controversial Met Gala outfit by Balenciaga — right down to the face cover! Kim has worn several incarnations of the look in recent months, including all leather versions, a red variation and a slew of outfits with the same pant-shoe leggings. Many have interpreted her new era of style to imply she’s potentially back with ex Kanye West, 44, who has a close working relationship with the French luxury label through their lead designer Demna Gvasalia. Gvasalia has also served as creative director Kanye’s recent visual listening parties in Atlanta and Chicago.

After just a few hours, Kim became increasingly bored with Aidy’s life and wanted to switch things back. After “trying to reach Kim Kardashian” as Aidy, the reality star finally caught up to the comedian sitting backstage with her sister Khloe Kardashian, 37, and mom Kris Jenner, 65. “I always wanted to have like, a famous sister and a famous mom,” Kim’s Aidy said to an adoring Kris. “Kim, you’re being so funny today!” Kris replied. 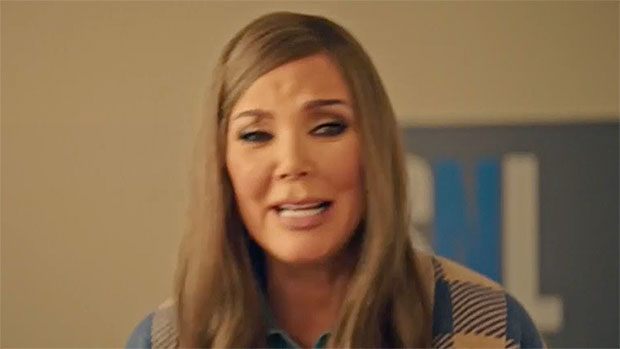 “Hey, is there any cash, that’s just like — around? That maybe I could like, have?” Aidy then asked, as Kris dug into her purse and pulled out a massive stack. Just at that moment, the real Kim busted in — but wasn’t recognized by her mom or sister. “I need my life back! Where’s that clock?” she asked. Kris then picked up the clock, but in a kerfuffle involving the three ladies, Aidy and Kris accidentally swapped spots. “I’m not Aidy! It’s me, it’s mom — it’s Kris!” Kris said, as Aidy’s Kris ordered her to be “sent to jail.”

Earlier in the day, Khloe and Kris were spotted touring around the Big Apple. The mother-daughter duo bundled up for a stroll around Central Park on Saturday, Oct. 9. While there was no confirmation about a possible appearance before the show,

The KKW Beauty founder and the Kardashian clan have been spoofed on Saturday Night Live in the past, with Kim being impersonated by Nasim Pedrad 13 times between (dating back to 2009). Notably, rapper Nicki Minaj also spoofed Kim back in Dec. 2014 on “Weekend Update” alongside Colin Jost. The spoof was tied to her iconic nude Paper magazine cover dubbed, “Break the Internet.”

“Most of the show has been written. But like SNL always does, they always go down to the wire and continue to make changes and add new skits up until and after rehearsals,” our source also explained. “But her sisters and her mother have Kim’s back and are ready to help in any skit this weekend and Kim is all for it.” Recently, Kris also appeared in daughter Kylie Jenner‘s 73 Questions episode with Vogue magazine.