Kylie Minogue Talks 'Parallel' of Her Disco Resurgence in 2020: 'Disco Came from Struggle' 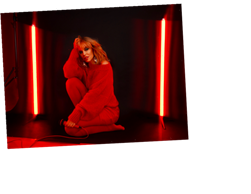 On her stunning, arguably perfect 15th album, the pop icon returned to her roots in disco, a genre she's successfully played with several times over the course of her 33-year music career.

In the new issue of PEOPLE, Minogue opens up about DISCO, which she unleashed last week.

"I knew it was heading to the dance floor, and I knew I was inspired by the feeling that Studio 54 gives us," Minogue, 52, says of the record. "For many of us of a certain age, there's all of that nostalgia, and it just so happens it's having a moment right now with the younger generation as well." Indeed, disco has experienced a renaissance this year, with pop stars from Dua Lipa (Future Nostalgia) and Doja Cat ("Say So") to Lady Gaga (Chromatica) and The Weeknd ("Blinding Lights")  getting into the groove on new projects. Unlike those artists, though, Minogue recorded most of her album, which sounds both timely as well as timeless, while in quarantine during the coronavirus pandemic.

On DISCO, Minogue, like a mirror ball, finds light in a year of darkness.

"Talking about disco now and what's happening in the world, there really does seem to be a parallel, because of course, disco came from struggle and from people needing to find a place for inclusion and diversity and to be accepted and to let those emotions out," she says. "So much has happened this year. It really did help me, and now I hope it can provide a moment of escapism for other people." Minogue herself could use an escape. The Melbourne, Australia, native and her boyfriend, the British GQ creative director Paul Solomons, 46, have been living in London since the start of the COVID-19 crisis, and she, like many around the world, isn't sure when she'll next see loved ones.

"Australia is far, but it's never felt further away than it does right now," Minogue says. "I look forward to the time that I can get home and see my family."

With the world on hold and nowhere to go, Minogue — when she wasn't watching Tiger King or gardening — poured herself into recording DISCO, a process she calls "an emotional roller coaster." "It involved learning skills that I previously just did not have. I had to engage my brain in different ways and basically learn to record my own vocals, and I also felt like I was spinning plates producing the album, which I wouldn't normally do to this degree," Minogue says. "And then, of course, because it's virtual, you're all in each other's houses so [there are] interruptions that you wouldn't normally have when a few of you are in the studio together. Whereas now, for this album [people would say], 'Oh, I have to put my toddler down for their nap' or 'That's the doorbell' or 'I've got to make lunch.' Just real-life stuff happening in the background.

"It ended up feeling almost normal."

For more on Kylie Minogue, pick up the new issue of PEOPLE, on newsstands everywhere Friday.