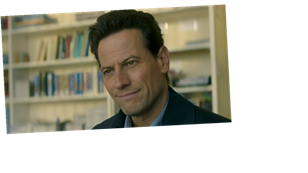 ITV thriller Liar returned to our screens for the first episode of series two tonight.

Viewers have been waiting more than two years to find out what happened to serial rapist Andrew Earlham (Ioan Gruffudd).

Fans of the drama were later brought up to date and shown the exact moment Andrew’s dead body was found in a isolated marsh by police officers.

DI Karen Renton (Katherine Kelly) quickly paid Laura a visit at work to quiz her about her whereabouts on the day Andrew’s dead body was found.

As the murder investigation continued, ITV viewers were distracted by the amount of flashbacks and camera work.

Taking to Twitter, one fan penned: "The camera man is rubbish on Liar. My screen is constantly shaking."

A second moaned: "I can’t remember who all these people are, and I don’t remember the camera work being so wobbly before? It’s really irritating me."

Another added: "Can't ITV afford a tripod? All this 'edgy' shaky camera stuff is making me seasick."

A fourth said: "Flashbacks galore already in this, so confusing."

A horrified Laura was later arrested for Andrew's murder after officers found Andrew's car keys in a draw at her home during a warrant search of a property.

Laura told DI Renton that she didn't know how Andrew's key got inside her home, but the detective wasn't having any of it and arrested her for the murder.

There are plenty of suspects with a motive to kill Andrew, but was it Laura?

Fans will have to stay tuned to find out the identity of Andrew's killer.

Liar continues on ITV on Monday at 9pm

Related posts:
Latest News:
Jodie Whittaker WON’T quit Doctor Who as rumoured exit blasted as 'total nonsense' by series 13 insiders
Coronation Street spoilers: Peter Barlow violently lashes out at dad Ken as he tries to stop him drinking
Supermarket face mask rules as councils send inspectors to enforce coverings across the UK
Mother transformed her spare room into homeschooling nursery for £350
Recent Posts
This website uses cookies to improve your user experience and to provide you with advertisements that are relevant to your interests. By continuing to browse the site you are agreeing to our use of cookies.Ok