The City of Melbourne is considering cutting the cost of parking in the CBD and seeking a reduction in the congestion tax in a bid to encourage motorists to return to the city centre.

The contentious plan would break with years of transport planning in the city, including last year's Transport Strategy 2030, which aimed to cut through traffic in the CBD and repurpose road and parking spaces for pedestrians and cyclists. 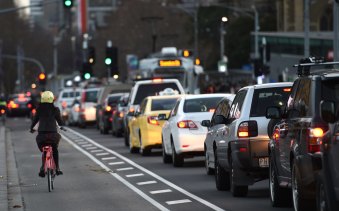 Driving into the CBD would be made cheaper and easier under a plan being put to the City of Melbourne this week.Credit:Vince Caligiuri

On Tuesday night the newly elected council will vote on the proposal, which could lead to on-street and off-street parking being made cheaper to "incentivise" visitors returning to the CBD.

The council will also consider seeking a 25 per cent reduction to the congestion levy paid to the Victorian government, which would cost the state $25 million over 12 months.

Any savings car park operators banked by not having to pay part of the congestion levy would have to be passed on to customers.

Lord mayor Sally Capp said the measures were intended to be temporary.

"Some people may be hesitant using public transport in the short term and, until that confidence builds, we are considering making parking cheaper," she said.

"We are also delivering 40 kilometres of fast-tracked bicycle lanes in key locations to make it safer to ride into the city.

"Any reductions in parking rates are temporary measures that are in direct response to the COVID-19 pandemic and council remains committed to the goals and actions in our endorsed transport strategy."

"If you think about this opportunity, when everyone's habits have been reset, it is an opportunity to do things differently and better," she said.

"If we do encourage people to always reach for their cars in these situations, and it's cheaper, it's pretty clear where that's going to end up. We could say now is the perfect time in fact for congestion charging, because congestion at the moment is pretty low."

Even with the majority of office towers vacant while work-at-home directives are in place, car trips to the CBD have increased in recent weeks.

In the past two weeks, road use has increased to more than 80 per cent of pre-pandemic levels across Melbourne. But last week the average pedestrian activity was down almost 75 per cent compared with the same time last year.

Public transport use is down to 26 per cent of pre-pandemic levels.

A report to the councillors acknowledges that public transport is the most efficient form of moving people around the CBD.

"It is the most efficient mode to support the return of the corporate workforce, as well as visitors, students and shoppers to the city. A key challenge is the public’s concern about whether public transport travel is COVID-safe."

"Public transport plays an important part in getting commuters into the CBD safely and efficiently – we’ve made sure all our trains, trams and buses are cleaner than ever before, and our extra services are giving passengers more choice to stagger their journeys."

"When you look at the population that's in the city [usually] and you know that 10 to 20 per cent of them have driven in, that is realistically the number that beyond which you've filled the capacity of the city."

"Free parking is always popular, but it ignores supply and demand economics," he said. "We need to support bringing people into the central city safely, and that means COVID-safe public transport, cycling and walking, not the empty promise of an endless supply of parking."