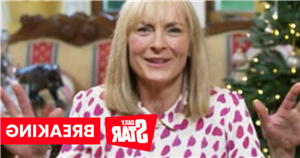 A man who admitted stalking I'm A Celebrity star Louise Minchin and her daughter has been sentenced to two years and eight months in prison.

Carl Davies, 44, was appeared at Mold Crown Court on Wednesday.

He was due to stand trial but later changed his plea.

Davies, of Flint, admitted causing alarm and distress to both Louise and her daughter Mia in July 2020 by posting intimidating comments on Instagram.

"Everyone has heard the full, graphic and disturbing detail of the messages you sent to Louise Minchin and her daughter.

"It is clear they believed you would carry out your threats because of the level of detail in your messages.

After the previous hearing in October, Davies was ordered not to encourage any third party to refer to the women on social media.

He was also told not to contact the women directly or indirectly, or approach any BBC-owned or run premises, or any BBC film set or areas.

Davies must not enter the Cheshire village where Ms Minchin lives.

He was previously convicted and handed a suspended sentence for stalking Girls Aloud singer Nicola Roberts.

The court heard the offences took place between 14 and 17 July last year, during the operational period of his suspended sentence.

Davies served in the armed forces in Iraq and had been living for many years with untreated post traumatic stress disorder (PTSD).

This comes after Louise starred on ITV reality show I'm A Celebrity after she officially left her long-standing position on BBC Breakfast.

Louise became the fifth star to leave the show in the 2021 series, which left just Frankie Bridge standing alone to fly the female flag in the Castle full of male celebs.

The TV presenter announced earlier this year that she would be departing from the popular breakfast programme after almost 20 years of starring on the show.