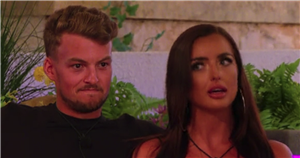 Love Island fans were left in hysterics on Thursday night after they claimed Hugo Hammond and his new partner Amy Day's facial expressions gave the Casa Amor recoupling results away.

During the episode, Hugo, 24, delightfully waltzed into the original villa with his new partner Amy, 25, declaring: "I am great, my Love Island journey has been great but it's been missing one piece… here she is!"

And as they got settled around the fire pit, it was time for Abigail Rawlings to reveal whether she wanted to stay with her current partner Toby Aromolaran or pick someone else.

The tattoo artist, 27, had remained loyal to the semi-professional footballer while he stayed in the second villa and even refused to sleep in the same bed as the new male Islanders.

Get exclusive Love Island stories and fabulous updates straight to your inbox with OK!'s daily Factor 50 newsletter. You can sign up at the top of the page.

However, after admitting she wanted to stick with Toby, 22, as she "can't fault his loyalty", fans were quick to point out that Hugo and Amy had already given the results away with their facial expressions.

After being asked whether she thinks Toby is a "loyal person", Abigail said: "I mean, with my experience of him, personally, I can't fault him. But I like to think that he has learnt from his past mistakes."

To which Amy opened her eyes wide and stared at the ground while Hugo did a smug look and quickly glanced at his new partner, hinting that there was trouble in paradise.

And the new couple were correct as it was then dramatically revealed that Toby had picked new bombshell Mary Bedford.

As Toby and Mary walked into the original villa together, Abigail's fellow Islanders were left shocked as they put their hands over the mouths.

While Toby's ex Chloe Burrows, who he had dumped for Abigail just hours before entering Casa Amor, shouted: "Oh my God, f**k off, what a f**king idiot" over the revelation.

Viewers were quick to take to Twitter to joke about Hugo and Amy's faces as they claimed the couple had already given the results away.

One person said: "Hugo’s face is going to give it away for every single couple. #LoveIsland."

Another follower commented: "LOOOOOOL amy’s face, she knows too much #LoveIsland" followed by laughing emojis.

While a different account added: "Amy and Hugos face is saying it all good girl look behind you #LoveIsland."

As Toby walked in with his new bombshell, host Laura Whitmore, who fans have been questioning her whereabouts during the latest series, said: "As you can see, Abigail stayed loyal to you…"

Speaking after discovering Abigail's loyalty, Toby looked shocked as he admitted: "I don't know what to say at the moment to be honest. I'm a bit shocked", adding that he thought she would have coupled up with someone.

Asked why he picked Mary, the Islander said: "Casa Amor was a clean slate, with Mary from the get go there was no pressure on the situation and she's an attractive, beautiful girl both inside and out. So if I want to come back, I'm going to bring someone I had something with as well."

Laura then asked Abigail how she was feeling about the betrayal, to which she admitted: "I've felt better to be honest. It's fine, it is what it is. I'm happy for you," to which Toby sighed .

Asked how she was feeling about being picked, Mary admitted she had no clue Toby had another girl waiting for him and said: "I'm happy to be here with Toby, but it's absolutely s**t for the girl, I'm sorry."

Elsewhere during the recoupling, Chloe revealed that she was going to recouple with Dale Mehmet after previously being in a friendship couple with Hugo Hammond.

For all your juicy updates on all things Love Island, sign up to our Factor 50 newsletter.

Love Island continues on Friday night at 9pm on ITV2 and ITV Hub. Episodes are available the following morning on BritBox.