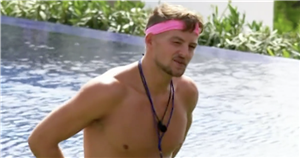 Hugo Hammond has said that he would "love" to return to teaching at some point in the "near future" after he was dumped from Love Island last week.

The PE teacher, 24, took part in a candid Q&A session on his social media on Sunday where fans asked him a series of questions about his life and time in the villa.

Hugo, who came to blows with ex Amy Day on Sunday's Love Island: Aftersun, was asked whether he was still going to be a teacher to which he revealed: "Yes, so last year I completed my teacher training and so now I'm officially a qualified PE teacher, which is great.

"I don't have a school lined up for September, but definitely in the near future when everything dies down, I would love to return to the classroom and do some teaching.

Get exclusive Love Island stories and fabulous updates straight to your inbox with OK!'s daily Factor 50 newsletter. You can sign up at the top of the page.

"But in the meantime, I would love to stay in the health and fitness industry and kind of help people understand how important it is to stay on top of our physical health and all of the benefits of that."

Hugo also answered fans' questions such as what meals Islanders eat in the villa as well as if he had any "regrets" after leaving the ITV2 dating show.

Hugo was asked by one of his 380K Instagram followers: "What sort of meals did you eat while on the villa and where did you eat it".

To which he revealed: "The food was decent, we had a lot of chicken and fish, so it got a little bit repetitive.

Elsewhere during the Q&A, Hugo was asked whether he has any "regrets", he said: "On reflection, I say I leave the villa with zero regrets.

"I was myself throughout, I met some incredible people, I had such a journey but at the end of the day, I was just Hugo and that's all I can be."

The Q&A comes after it was reported that Hugo will not be returning to teach at his former high school as he was on a “very short placement” before he signed up for Love Island.

A representative from the school told the Daily Star: “Mr Hammond was here on a very shorty placement during his teacher training in the Spring Term. He was not employed by the school.”

For the latest Love Island gossip, make sure to sign up to OK!'s daily celebrity newsletter and Factor 50 – your one stop for all the latest villa news.

Love Island continues nightly at 9pm on ITV2 and ITV Hub. Episodes are available the following morning on BritBox.