MAIL ON SUNDAY COMMENT: Get a grip, Boris, or Blairite elite will ruin this country for good

Tony Blair is back. He may be too unpopular ever to stand for high office again, but the newly made Knight of the Garter still thinks he can pull the strings of the minor figures who now lead the Labour and Liberal Democrat parties. And he may well be right.

Blair now has more money than he could ever spend and a vast property empire too. But he has plenty of time, and so, at 69, his mind is turning back to his political legacy.

As he explained to Andrew Neil yesterday in our sister paper, the Daily Mail, Blair yearns for a new European-style alliance of radical forces.

He and his allies call this ‘centrism’ but it is in fact a hugely revolutionary programme, pursued by people who pretend their Europhile red-green ideas, a mélange of windmills, sexual revolution, open borders and high taxes, are the mainstream.

Of course, they are not mainstream at all, but a continental-style voting system, the undoubted key to Blair’s ‘Future of Britain’ dream. This would be a revolution, putting anti-conservative radicals in permanent power at Westminster, as it has done in many continental countries, notably Germany. 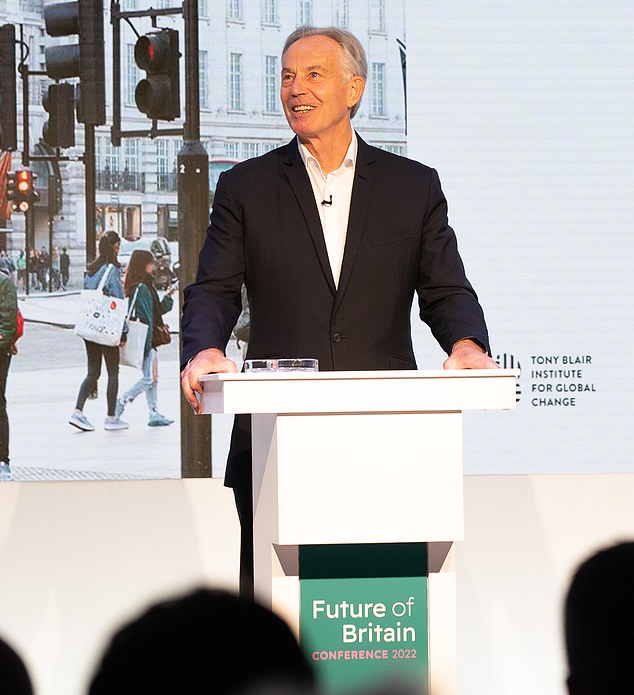 Blair now has more money than he could ever spend and a vast property empire and plenty of time, so his mind is turning back to his political legacy. Pictured: The Future of Britain conference addressed by Tony Blair on June 30 2022

And this is the menace we face. Sir Keir Starmer, Blair’s disappointing heir, is most unlikely ever to win a working majority. But with Lib Dem support he could easily form a government after the next Election. Its central aim would be an electoral system which would break up the existing parties, especially the Tories, and so allow Britain’s Blairites to form an unending succession of post-election coalitions.

Voters could not prevent or remove such alliances, because they would be negotiated after the votes were counted. This is a grave danger to our national future. Only the Conservative Party can prevent it from coming to pass.

There is a point in every government, like the summit of a roller-coaster, where the whole nature of the ride changes. For a couple of years, Ministers and MPs may indulge themselves and pursue pet projects or personal ambition. But then it all alters. Suddenly, everything is about the next Election. There is no room for indulgence. Even ambition has to be stifled, for in opposition ambition has few outlets.

And the other problem with opposition is that it can last a very long time. In the present case, defeat could mean permanent exclusion, the end of centuries of alternating governments and the beginning of an era of so-called proportional representation, in which the elite are the ones who get represented, out of all proportion to their numbers. Under such a method, voters would lose their ancient power to chuck out leaders they do not like. So the coming campaign could not be more important.

We have asked before why the Tory party, our bulwark against the Blairites, seems to have a death wish, just at the moment the country most needs to be defended from the destructive, spendthrift, woke and incompetent Left. Now we must also ask why the Prime Minister seems so unable to get a grip on these events.

The Pincher affair, in which he has been slow to act and has made feeble excuses for his supposed ignorance of the problem, has made him look weak and foolish. There is no more room or time for this sort of unprofessional messing about.

For the sake of Britain, for the Union itself and our historically unique and vibrant form of democracy, Boris Johnson and the Parliamentary Conservative Party have to rediscover discipline, purpose and competence – and quickly.